My new craze is no longer making sausages for all and sundry. Actually, I'm tired of making sausages. I think the 30kg I had to make for this weekend's Charity World Cup in Nanjing Football Day killed it for me. Mind you, ton be honest, I haven't been very keen to get back into sausage-making since I got back from my Christmas holiday. My new craze, is writing hubs (articles) on a website called Hub Pages. I even stayed home and didn't get round to go to a great party last night as I wanted to work on a hub about our holiday in Goa. I think I am addicted. I always wondered if I wasn't slightly obsessive compulsive with traces of an addictive personality.

But, I really should be working on writing my book. Oh well, back to my Hub Pages Articles. Last week my article about living as an expat in China was voted the top article for the week. This week my article about traveling cheaply through South East Asia has been nominated. . Please vote for me again! I'll give you the link.
My article up for nomination this week was reviewed along with the other 9 nominated. This is what the review guy said.
How to enjoy a holiday in South East Asia with very little money (http://hubpages.com/hub/How-holiday-South-East-Asia-little-money)

Writing - Wonderful writing. There were a few (and I mean very few) errors, which were easy to overlook, considering the overall success of the piece. There was a certain wit and humor throughout the piece that made it an absolute pleasure to read and that I believe very few authors would be capable of delivering. There is an intimate aspect accomplished through the author's relating of familial moments that really give this work a cozy feel. The writing is fluid and appealing and really brings you in.

Content - Absolutely bursting with substance! Between the almost 80 photographs and their descriptions, and the richness and detail of the author's narrative, one finds a varitable cornucopia of cultural information. For anyone planning a trip to the areas described, this piece would be an absolute treasure. I really appreciated the detailed captions for each of the pictures. I really felt as though I was right there, in the boats and the bars, just soaking up the local squalor and scenery. Magnificent.

Have to admit, when I read that review I actually blushed and it made me feel good. Really made my day. So, please vote for my hub! (You can even read it if you want!) http://hubpages.com/hub/Hubber-Poll-March19-2009-Batch-of-Spring-HubNuggets-Anyone.

Posted by Cindy Vine at 5:07 PM No comments: 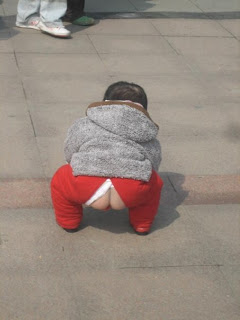 Just when you think you're over China...

When you see this kind of advert then you know that you're in for some potentially tough situations where if you don't laugh, then you might just cry. China is definitely one of those countries where you need that sense of humor. Boy, do you need that sense of humor! Take today for instance. I've had this bothersome tooth for over a year. I avoid going anywhere near the dentist as my medical insurance does not cover dental treatment. Previously, when infection flared up in the tooth, I got over the counter antibiotics - the stuff you need a prescription for in the West, and after a day or so the pain subsided. Well, today the pain flared up again. So much so, that it feels as if someone has taken a chisel and started to chisel away at my cheekbone. In fact, that whole side of my face feels swollen, like I've been punched. (And yes, that has happened to me before so I do know what it feels like!) Teaching nine year olds with toothache is not the most pleasant of experiences. Every little shrill voice seems to jar your nerve endings. Anyway, one of the other teachers happened upon a local Chinese dentist the other day whom he says cleaned his teeth well for a very cheap price. So, after school, grimacing with pain, I made my way to the recommended dentist, only to find that the examination room was filled with workmen of all shapes and sizes, drilling away with giant jackhammers and hammering with hammers. The brand new dental surgery, only open for a fortnight, was already being revamped. Something you see quite often in China. With the deafening noise sending spasms up my swollen cheek, I timidly advanced into the front office which was set out like a little pharmacy. "Drugs," I thought to myself, "Need drugs badly!"

An old man who could have been the dentist, approached me and rattled out a few sentences in Chinese, which I completely failed to understand. "Ting boo dong," I replied, wincing with pain as the jackhammers hammered away in the background. That mean that I don't understand. The old man smiled revealing severely rotting brown and grey teeth. I hoped that he wasn't the dentist, as obviously, he'd never done any work on his own teeth. It turned out that the old man could write English, even though he couldn't speak it, so he wrote down for me that the dental surgery would be re-opening on Sunday. "Mmmmm, mmmmm...," I moaned holding my cheek in pain, hoping that if he noticed I was in pain then he'd be able to give me some drugs. The old man smiled at me and nodded, opening his desk drawer he removed a slightly grubby flashlight covered in oily fingerprints. He then reached inside his drawer again and removed a chopstick. He opened his mouth with the grey brown teeth, signalling to me that I must open mine, which I dutifully did. I'm not sure if it was because my common-sense was dulled by the pain. He used the chopstick as a tongue supresser and peered into my mouth, with one of his nurses holding the flashlight and shining the light into my mouth cavity. He nodded to himself and wrote out a script in Chinese and gave it to the other nurse who fetched me some medication. Three boxes, I seriously hoped that one had pain meds in it. "P-R-N," he said slowly in heavily accented English, pointing to where he had written exactly that on the box. He picked up the next box and read what he'd written, "B-I-D," he said slowly. I was confused. I had no idea what the old man was talking about. "T-I-D," he said as he pointed to his writing on the third box. Having lived in China for three years and asia for four, it took a while before I figured out what he meant. P-R-N meant only take when you have pain. T-I-D meant three times a day. B-I-D means twice a day. Don't ask me how I figured that out, but he nodded vigorously when I repeated that to him.

The medical encounters are just one of the things that makes China, China. The other is split pants. I have an aversion to split pants, probably because I've twice been in Walmart and seen toddlers pee through their split pants all over the bottom of the trolley and drip urine all over onto the floor. The mothers just laughed and carried on walking. I was aghast, when I glanced back and saw other people happily pushing their trolleys through the pee, spreading it all over the shop floor. Then, when you walk on the streets, you often see people holding babies and toddlers over the gutter or rubbish bins and letting the babies poo through their split pants. Then again, there is the hoiking, another personal favorite. Wherever you go in China, you continuously hear people hoik as they clear the mucous from their throats and spit it wherever. On the ground, in the ashtray on the table next to you in the Italian Restaurant, on a plane, and then of course - on my motorbike seat! The pollution is also something to grab you. Permanent smoggy skies, sore throats and often funny metallic tastes in your mouth. The list goes on.

But why, you may ask, besides the money, why do expats go and live in a place like China? I have to say that there is something about experiencing a different culture and traveling around and seeing amazing centuries old sights. My first year I though everything was wonderful. The second year you tend to see more of the negative that the rosecolored glasses of your first year hid from you. By the third year you are over the wonders of the new culture and start to get easily irritated. then you know, it's probably the best time to move on to new adventures, see new sights, experience a different culture. When I looked at my fake terracotta warriors already in their shipping cases, the piles of packing boxes delivered by the relocation company yesterday, I felt a little sad. China has been frustrating, irritating, but at the same time beautiful and magnificent. The great wall is definitely a once in a lifetime experience, something that should be on everyone's bucket list. The fact that the Oasis concert I was going to in three weeks' time has been cancelled because the Chinese Government refuses to give them a visa because they played in a Free Tibet concert in 1997, is one of the frustrating things of living in China. However, the friends you make who hail from so many different countries, and the wonderful memories you've made together, the fantastic times you've had - all make living the expat life a very rewarding and enjoyable experience. Even in a country like China.
Posted by Cindy Vine at 6:13 PM No comments:

Life is full of ups and downs, good days and bad days. We always hope we have more good days than bad days. This week passed in a flash, with us having to do more and more paperwork. But, I managed to fit in a scrabble night with friends. We play this different kind of scrabble called Speed Scrabble and another one called Grabby Scrabble. great fun, both of them, you don't use a board like normal. I have to try and be modest but okay, I rock at scrabble.
Friday night was Vicki's birthday and celebration of her resignation from her tenure in Australia at the Irish Pub. Seem to be making a habit of that one! At least I got home at a reasonable hour, midnight.
Saturday night was the first ever Progressive Dinner in our compound. A great success, thank God. I proclaimed myself the Social Committee at the start of the school year in an attempt to raise staff morale year. Last school year was so dead and many teachers complained that our school was sterile, dead and had no soul. So, ever the organiser, I've been organising pub quizzes and all kinds of social functions, the Progressive Dinner being the latest.
I got home at 11.30pm and then proceeded to watch rugby on the macbook until 3.30am. Jeez, sometimes I do think I'm crazy. So, was quite tired this evening and thought I'd have an early night, but guess what. Just watched Slumdog Millionaire. Now it's 11.30pm. So much for my early night.
I decided to venture into Nanjing today with my friend Janet. Spent heaps of money. Typical. Started off at caroline's furniture shop where I bought my brother the two terracotta warriors he wanted, and got a waist high one for me. Got to remember China when I go! Surprisingly enough, nobody hoiked and spat near us. Must have known I was coming!
I've written an article on my hub page you might be interested in reading. Here's the link. http://hubpages.com/hub/When-mammograms-are-wrong
Well, have to sleep....am tired as but have to admit, I did it to myself.
love
Cindy
Posted by Cindy Vine at 6:17 PM No comments: