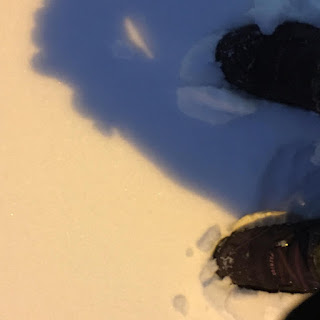 All my life I used to think how pretty snow looked in the distance on top of the mountains.  My first experience of snow was when I lived in New Zealand.  We were fresh off the boat, so to speak, had only been in New Zealand a few weeks and decided to drive down to the Lake Taupo region to look at the snow capped Mount Ruapehu.  We were excited.  We were actually going to touch snow for the very first time.
Well...
We did not realise that you had to wear proper clothes for the snow.  So to say we were under-equipped, is a gross understatement.  My youngest daughter had a beanie and wellington boots.  My son had a beanie and a jacket.  My eldest daughter and myself didn't have anything suitable for snow.  We found out the hard way, that snow is cold and wet and not powdery dry stuff.  Jeans and sneakers are not proper snow gear.  After standing around in the snow without gloves in icy cold wind for about five minutes, my youngest started crying and wanted to go home.  So we trudged through the snow to the restaurant, had a hot chocolate, and drove the 4 hours back to our home in Pukekohe.  That was our first snow experience.  We subsequently went to Queenstown in winter wearing the correct clothing and it was a much better experience.
As a family we experienced snow in South Korea, and again when we lived in China.
But I guess as an empty-nester I have experienced the most snow - when I lived in Ukraine and now that I live in Norway.
While I love sitting next to the window watching snow gently float down to earth outside, I am not a snow fan.  I reckon it's genetic.  Although my DNA test does have me as 10% Norwegian and Swedish.  Many of my friends around the world who have not yet encountered snow as I have, often ask what it's like to walk in snow.  Well let me explain it like this.  Walking on fresh snow is like a combination of walking on bubble wrap and thick sand.  With each step the fresh snow cracks and pops as if you are stepping on bubble wrap.  But then the effort of walking on snow is the same as the effort of walking in thick sand.  I do enjoy walking on fresh snow though.  Old icy snow is a different story!
Cindy Vine is a South African author and teacher currently living and working in Norway.  She is the author of Not Telling, Hush Baby and The Freedom Club - all available on Amazon in both ebook and paperback formats.
Posted by Cindy Vine at 4:54 PM