Twelve midday arrived and I had my running shoes on, ready to sprint out of the door. Holidays. Thank God for them. One of the best inventions ever. Fried, frazzled, frustrated, jeez, we all need a holiday. It's been a long, long term. We're plain worn out. And for those who think teachers have it easy because we get school holidays? We need them. Plain and simple. Sanity breaks are desperately needed. The alleged rapist skeddaddled with my $100. I doubt I'll get it back. But then, he also skedaddled with a pair of hiking boots, wet weather jacket and backpack belonging to the school, so I don't feel lonely. Merry Christmas

Mister Alleged Rapist. See, I'm a nice person.
The past weekend was sports weekend and Tony was ecstatic he managed to get in a game of rugby.  Siobhan was in the winning junior girls' netball team. 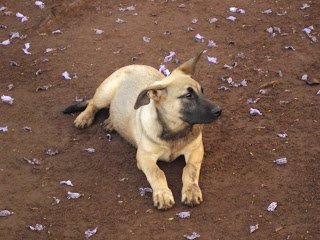 Monday and everything that can go wrong went wrong. Actually, it couldn't have been that bad as I've already forgotten all that went wrong, only that it was one of the most frustrating days I've had since I arrived in . Amazing how quickly we forget what it was that frustrated us so completely. All I remember, was that I was very frustrated. One of the things was, that my friends from China, Andrei and Arden and their two boys were delayed for three hours on the runway in Bangkok, so they missed their connecting flight in Nairobi. So instead of arriving in the morning they arrived at night. The good thing was, was that the airline arranged visas and a luxury hotel for them to camp out in for the day in Nairobi.

guide, arranged for some other guides to take them up the mountain, so the day was saved. But there were a few nail-biting moments for me. So, if you are planning a hike up to the summit of Mt Kili, give me a shout and I'll arrange it for you. It is quite pricey though as the park fews are quite dear. You'll be looking at just under $1000 all told, including tips. You have a guide, porter and cook going up with you, so you won't feel lonely on that big pile of rocks.
Andrei is an animal. Yesterday morning, he was up at 5am (as he is every mmorning)and ran for two hours, came home had a cup of coffee and a shower, hopped on his bike and cycled to Marangu which is an hour by car away, the last 10km being up a steep hill, and then waited for his family to join him to climb the mountain. As I said, an absolute animal. Not human at all. How he does it, I have no idea but I get tired just watching him. Arden and the two boys were initially going with him just until the first hut, then were going to return today, but she texted me saying that it was so fabulously awesome, that they were going to go on today until the next hut and return tomorrow (Saturday). What a relief that they are loving it, after all the drama! 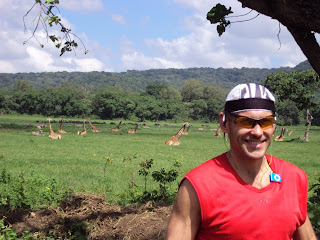 It was so great seeing them again and getting our parcel of TV series from Kerri. I miss her so much and wish she could have been smuggled over in one of their suitcases.
Wednesday and Tony went with Andrei and Arden and their boys to the Arusha National park. Luckily, his ranger course from last year paid off as he was able to identify many of the animals. All Andrei wanted to see apparently, were flamingoes. Which he did. Thousands upon thousands of them. When Tony pointed out impala and kudu, Andrei said, "Ah, that's just deer!" No Andrei, no deer in Africa! Then of course, ANDREI insisted of getting out the vehicle to get closer shots of herds of buffalo. Tony told him to stay in the car as the buffalo were wild and dangerous. Andrei's comment, "I eat buffalo for breakfast!" Maybe that's how he could run and cycle before climbing Mount Kilimanjaro. Anyway, a tour guide with his landy filled with tourists arrived and told Andrei and Arden and the boys that they face huge fines leaving their vehicle. So apparently, still clicking madly with their cameras, they slowly inched back to my car. The next thing was Andrei hanging out the window by the skin of his foreskin, trying to take photos of the perfect wildlife shot. Arden and the boys are back tomorrow. Andrei should summit tomorrow night, and then will be back on Monday. he's never been 5800m before, so here's hoping that the altitude doesn't get to him.
Tuesday, we head off to Pangani on the coast, so I might not be able to get on the internet over there. I've just have my phone connected to the internet, but whether it'll work, only God knows. Andrei, surprisingly enough, is planning on cycling as far as he can to Pangani. It is 400km away, so we've agreed, he can leave two hours before us, and where ever we encounter him along the way, that's where we'll pick him up. He's not too haapy, but has agreed to reach a compromise. We did promise he can cycle the last bit to Pangani though. Men

. Do they ever grow up!
Hopefully, I'll send a last Christmas email before we leave.
Have a simply fantabulous weekend! And, if you're traveling, do it safely. It still doesn't feel as if Christmas

is upon us. Although, I did succumb and buy a small plastic Christmas

tree when I was in Arusha yesterday.
love you lots!
Cindy
Posted by Cindy Vine at 7:28 PM