Everybody needs a spa day! 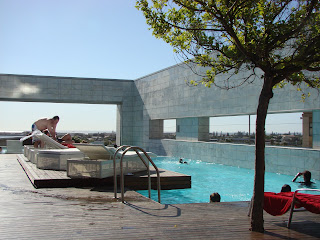 Sometimes your family knows just what you need! My youngest brother David and his wife Ellen, gave me a gift voucher for a spa day at the very exclusive Crystal Towers Hotel and Spa in Cape Town. What an amazing Christmas present, and to make it even better, they gave my two youngest day passes for the theme park, and my oldest daughter the same at the Crystal Towers. We got to enjoy quality mother/daughter time!

Never having been to a spa before, I was in for a treat! Okay, I've had many foot massages and back massages in China - some leaving me quite badly bruised and unable to move. The Thai massage in Thailand had been so gentle that it was a bit of a waste. A tiny girl/woman walking up and down my back. In Goa India the ayuverdic massage with special oils had been amazing and invigorating. But that had been in the back of a little shack-type shop. A spa day in such opulent luxurious surroundings was a definite treat and something I'd never encountered.

The entrance was so grand! Uniformed women tip-toeing softly everywhere, all looking civilised, soft relaxing music in the background; it was like I'd accidentally stumbled into another world. A world of rich people and Hollywood movie stars. I quite liked it. This was something I could get used to, and if I lived in Cape Town, I might have to visit once a week. A perfect escape from the reality of life. Hmm, not sure if my pocket can deal with that!

We had to get naked and drape ourselves with luxurious white robes and wear little slippers. The therapist was wonderful, and her body massage soon put me to sleep, so I probably snored away loudly while she gave me a pedicure and then a manicure. I just remember her saying, "You have the perfect nails for French nails, can I do that?" I grunted yes not knowing what the hell French nails were, but they looked good afterwards.

The Crystal Towers has this amazing swimming pool which faces onto the road that runs alonside. Hard to describe. It's on the 4th floor or so, but the side of the pool is the glass window. So cars driving past can see you swimming. Cool if you have a hot body and are built like a Hollywood starlet. Not so cool if you look like a hippo that's migrated south. I braved the glass side of the pool and went for a swim anyway, but had to get my daughter to hold the towel to block the view from drivers driving past. No sense in causing one of them to look up and see me and cause an accident. Maybe that's the whole point. You need to use their spa to get a better body so as to avoid cxausing car crashes when you swim there!

We had to go back the next day to use the flotation chamber. Knee-deep water smelling of sulphur, you float on your back and fall asleep listening to the relaxing music played through underwater speakers. A half an hour later you get out and shower off the salt. So you would think. Unfortunately, I did not take advantage of the shampoo and conditioner that was supplied in the shower, but settled for a basic rinse-off in the shower. An hour later my younger daughter asked why I had white smudges all over my face and neck. It was dried salt! To make it worse, I accidentally ran my fingers through my hair. It was like touching a steel helmet. The salt had dried, making my hair stiff. Pulling at my salty locks caused white powdery salt to fly in all directions. Soon the dashboard of the car was covered in a fine white layer of salt. The moral of the story is: Use the shampoo and conditioner provided by the spa. It's there for a reason!


This book wasn't that bad but wasn't as brilliant as some of his earlier novels. It was a bit ho-hummish and I missed Alex Delaware, Robin, the dog and Milo Sturgis. They basically only had mentions in the book which is based around his new characters who don't quite work quite as well as his previous characters. Maybe it's just because I am getting older, I'm getting more resistant to change.

It took a while to get into the book, which for me with a Jonathan Kellerman was quite unusual. Once I got gripped I did enjoy it and we raced towards the end.

The brothers he uses now as the main protagonists, they both irritate me. I think he needs to develop them further maybe appearing as minor characters in an Alex Delaware/Milo Sturgis story.

View all my reviews
Posted by Cindy Vine at 12:22 PM