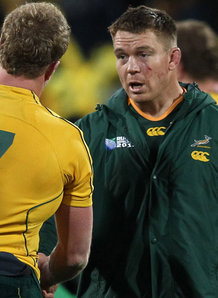 Coping with disappointment is never easy.  You psyche yourself up for something you believe is going to happen, then circumstances beyond your control throw you a curve ball.  Feeling let down can be depressing.  The recent quarter final loss to Australia is a good example.  In my heart-of-hearts I had expected the Springboks to win.  I could already picture them holding the Rugby World Cup Trophy up in the air again.  The number one team in the world.  It was not meant to be.
Once the initial shock of the disappointment has passed, it's time to look at the positives.  I was just as proud of the Springboks in defeat as I would have been as if they had won.  Their sportsmanship and graciousness in defeat was something our youth can learn from.  They played like world champions right up until the final whistle.  All I am saying, is watch out in 2015!  The boys will be back!
There are always things that happen which puts disappointments in perspective.  You can't let them rule your life, you have to move on and focus on something else.  In my case, it is rats in the kitchen.  You all know that UB40 song, right?  Well, please don't sing it.  The rat problem is actually not very funny.  It is traumatising.  Maybe, dare I say it, even more than the Springboks unfair loss. 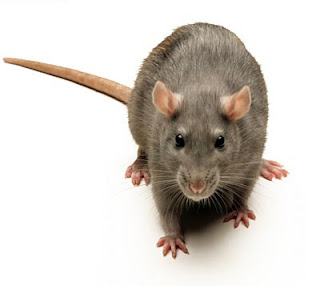 Rats are cute.  However, when they get into your food cupboard and leave their droppings everywhere, some of their cuteness dissipates.  A few weeks ago I opened the food cupboard to see a rat quickly jump down and hide in a box amongst the neatly folded supermarket packets I recycle.  My housekeeper called the gardener and he managed to batter the rat to death.
I should have realised that rats are social creatures.  They have friends.  If you have one rat, you surely have another.
A couple of days after the death of the rat, I noticed some items knocked over in my cupboard, a half-eaten biscuit where it shouldn't have been, and what looked suspiciously like some rat droppings.  When I told my housekeeper about it she assured me the rat was dead and those brown crumbs were coffee granules, or cocoa.
On Sunday afternoon while I was reading a book on my bed, I heard a blood-curdling scream from the lounge.  A hysterical Siobhan said she'd seen a rat run down the passage.  We called on Tony, my strapping 1.95m rugby-playing twenty year old son to attack the rat.  He ran into his room screaming like a girl and jumped onto his bed.  If this is the future of rugby in South Africa, I have to wonder about winning the world cup back in 2015.  Eventually he calmed down and grabbed his Maasai spear and went to attack the rat hiding in the bottom of the food cupboard.  The rat, like lightning, jumped over Tony's foot and sped across the kitchen floor to behind the stove.  Although Tony moved the stove and the fridge, the rat had disappeared.
The screaming didn't stop with the rat.  Tony closed his bedroom curtains and a large gecko dropped down onto him.  He flung it across the room with a high-pitched yell.  Siobhan went to the bathroom and started screaming as a large cockroach had positioned itself blocking her way to the toilet.  It seems as if all the Moshi-wildlife had come out after the rains and were determined to make their presence known.
Most shops and markets in Moshi are closed on a Sunday afternoon so we weren't able to purchase some rat traps.  I managed to get two lethal-looking rat traps on Monday.  Tony tested one with my ballpoint pen and it snapped the pen clean in half.  I imagined walking into the kitchen to find a decapitated rat's head stuck in the trap and the body at the other end of the kitchen.  Despite using some of our choice imported chorizo to bait the trap, the rat and his friends weren't interested.  This morning the traps were still set, the chorizo untouched.  Tonight we might try smearing the chorizo with peanut butter.  I am determined to kill these rats, however cute they may look.
So the moral of this story is, when you are faced with having to cope with upsetting disappointments, redirect yourself and find something else to focus on.  Like rats!
Posted by Cindy Vine at 11:05 AM