Entrepreneur, Best Selling Author, Publishing Liaison, and Motivational Speaker are just a few of the makings of O. Keeys (Omegia). After serving two terms in the military Omegia went on to apply her strategic planning to the publishing industry. She has garnered numerous awards and praise to include the Scribe Award for the National Black Book Festival, guest speaker for The Miami International Book Festival, and ranking in Conversations Magazine top 100 books of 2010 and 2011. 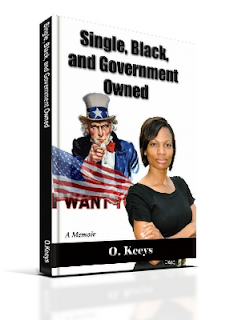 In between book touring Omegia spends her time dedicated to helping her fellow authors. She has over 20 years in the publishing industry in which she started out as a teen working in her mother’s book store. Omegia has many published books to include (Adult) Passionate, Playmates, Seduction.com, Can You Keep a Secret? and Erotic Moments: Love, Lust, and Desire, (Memoir) Rise and Fall of a Track Start and Single, Black, and Government Owned, (Young Adult) The Baby Girl and Unloved, and (Self Help) The Not So Common Sense Guide for Authors.
Who Are You to Pen a Memoir?
“You’re not a celebrity so what gives you the right to pen a memoir? You don’t look like you’ve been through anything.” I stared at the older lady and composed myself before responding.  Being I was at what was probably my 50th book festival I was used to all sorts of questions regarding my writing but this is one which caught me by surprise. If she wasn’t still in front of me with her nose turned up I would have thought I imagined it.
My answer was simple but not short and sweet. “I wrote a book which people can relate to. Being a victim of molestation, rape, racism, sexism, of abuse, and much more has nothing to do with how I look or my status. But, if it makes you feel better I felt like a celebrity every time I returned home to my family while in the military, when I qualified for the Olympic Trials, and when I overcame every obstacle put in my way.”


The woman’s frown softened a bit and she purchased my book. A few weeks later I had an inbox message on Facebook thanking me for setting her straight. She stated she laughed, she cried, and wanted to strangle some of my family members. My intention wasn’t to set her straight, as she put it, but to let her know being victimized in anyway has nothing to do with how much money you make so why should speaking on it?
Single, Black, and Government Owned isn’t a woe is me depiction of my life by any means. Yes, some terrible things happened to me, but overall I feel I’ve lived a pretty good life. In fact I really didn’t focus on the bad much but how I went through life trying to overcome it. It wasn’t an easy decision to write my memoir. I was scared of what people who thought they knew me would think, but the voice inside of me had other plans. The voice said screw their feelings and do what I needed to do to finish the manuscript. In the end the voice won out and trapped me in front of my computer for three weeks straight as my life played out before me. I’m all the better for it. This memoir was the therapy my soul needed.


I’m accountable for all my actions and have learned I can’t control the action or inaction of others. My goal for my memoirs, this and Rise and Fall of a Track Star is to help those who’ve been victimized and to give my readers a great story through my raw emotion.  One doesn’t need to have walked in another’s shoes to begin to understand their plight.
Omegia Keeys


Please enjoy this snippet from Single, Black, and Government Owned
What the heck was I thinking? I stood in front of a brown brick building with about fifty other people, both male and female, being screamed at. We were lined up in four rows with ten in each column. I was in the second row, midway down and an arm’s length away from the each of the four other people surrounding me.


“Drop your bags! Pick them up! Hold them with your arms straight out!” one of the drill instructors yelled.


Dressed in their battle dress uniform (BDU’s) and Smokey the Bear hats, they swarmed us. Something about those hats made them more intimidating. For me, it was because it blocked their eyes, but for those who got the one-on-one attention of the drill instructors, it was something more. The fear could be seen on their faces whenever a drill instructor approached them. One guy with long, blond hair received special treatment with the hat. The drill instructor stood so close as he spoke to the boy, the brim of the hat smacked the boy in the forehead on every other word. By the time the drill instructor was finished, the poor guy had a red indention on his forehead.


“You rainbows are a bunch of freaking idiots! You just couldn't follow directions, could you? The Airman manual clearly said pack two changes of clothes,” another drill instructor added.


I found out later they called us rainbows because it was day one of Basic Training and we hadn't been issued our uniforms yet. The group of us standing together in formation with different colored clothing made us look like one big rainbow.


With my arms out straight and parallel on both sides of my body, I fought desperately to hold up my bags in my hands. My arms were just beginning to feel the burn and from all my years of watching military movies, I knew this was only the beginning. I held back tears as I reflected on what had gotten me to this point…..

Other Books By O. Keeys:
(Adult) Passionate Playmates, Seduction.com, Can You Keep a Secret?,
(YA) The Baby Girl, Unloved,
(Memoir) The Rise and Fall of a Track Star and Single, Black, and Government Owned,
(How To/Self Help) The Not So Common Sense Guide for Authors – coming soon.

Giveaway: 5 E-books will be given away during the tour. a Rafflecopter giveaway 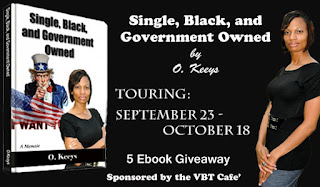 Thank you for hosting Omegia today :)

Thanks for having me Cindy!