The Story behind the Story - Defective

There are writers who can create a whole story in their heads from nothing.  There are others of us who are sparked by an interesting snippet of conversation , a news item, something we've seen.  Anything which ignited the creative juices.  Whatever initiated the story is the story behind the story.
The Spark
As a teenager I heard about a murder case - The Scissors Murder.  It was in all the newspapers, everybody was talking about it.  This story sank into the murky depths of my subconscious and lay buried there until a few years ago.  I'd just finished a novel and wanted to start a new one.  But what to write about?  Where to find a story?  I have always been interested in the dark side of human nature and what motivates them to do what they do.  In a flash The Scissors Murder came into my mind and I researched it on the internet to refresh my memory about what happened all those years ago.
The Scissors Murder
On the 4th November 1974, 46 year old wife and mother Susanna van der Linde was stabbed to death in her home in Cape Town South Africa, with a pair of scissors.  The perpetrators of the crime were 19 year old Marlene Lehnberg and 33 year old Marthinus Choegoe.
Marlene Lehnberg worked with the victim's 47 year old husband, and soon after she started working with him began a 2 year affair.  He told her he'd never leave his wife for her, but was prepared to continue with the affair.  Marlene had had a very conservative upbringing with an abusive father.  Marlene was convinced that the only obstacle between her and marriage to Christiaan van der Linde was his wife.  You can read more about the murder through this link
The Plot and Characters 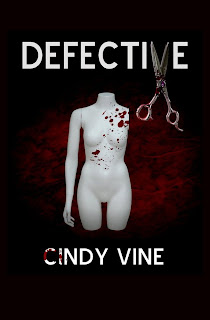 I was fascinated with the story, what motivated a young girl to embark on an affair with a married man so much older than her?  What drove her to murder his wife?  What role did the husband play in the murder?  There didn't seem to be answers to these questions.  So I thought, what happens if I use the basic plot, create my own characters with their own life stories, and try and figure out what the motivations could be.  I used The Scissors Murder as the spark, the starting point and then let my imagination take over.  That is how my novel Defective came about.
You can purchase Defective as a paperback or on Kindle from Amazon, Smashwords, Barnes and Noble and the Apple iStore.


Reviewed by Bob MacKenzie for Readers Favorite
"Defective" is the sort of story that sneaks up on you like those elusive shadows that give you shivers in the night. There's something about 17 year old Kara Butler. Though it would be easy to feel sorry for her, it's as easy to cheer her on. With an abusive father and a mother who mostly ignores her but will help in a crunch, Kara leaves home for the big city of Capetown. Innocent in the ways of the world, Kara nonetheless gets an apartment and finds a job. It all seems quite heroic. There is something else about Kara, something not quite right, something that her new-found freedom has set loose in her world. As her story seamlessly moves into darker and darker places, Kara's world slowly unravels. Drawn into Kara's journey of discovery are a promiscuous medical doctor, the doctor's emotionally abused wife, a boy who believes he is a secret agent, an Abbott and Costello team of detectives, and a cast of other quirky characters. The effect of this story is both surreal and chilling.

"Defective" is not a thriller in the truest sense. Neither is it a mystery or a police procedural. The genre is hard to pin down, shifting as it does while the story progresses. In some ways, the television series 'Dexter' comes to mind, in other ways Hitchcock's Psycho. It is tempting to call "Defective" a psychological-thriller. It is certainly psychological, though perhaps more in the way an update of the old-fashioned Gothic novel might be psychological. Quirky and intriguing, this story is clean and tightly written, drawing the reader inexorably to its inevitable conclusion without ever revealing that climax until it arrives. For readers who prefer their books to be intelligent, thought-provoking, and challenging, "Defective" will be an ideal choice.
Posted by Cindy Vine at 2:43 PM