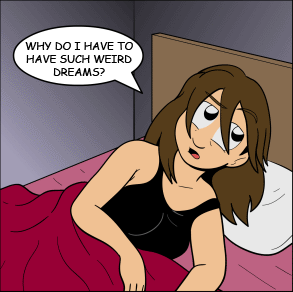 When you are dreaming and you know you are dreaming, then that is called a lucid dream.  You often have control of the dream and can force yourself to wake up if it gets out of hand.  The other night I had such a dream, well more of a nightmare actually.  It did involve zombies but that's all I remember.  That and the soft hoarse scary voice that seemed to be talking throughout the dream.  The voice freaked me out more than the zombies did.  But there was a point when in my dream I said to myself, "You are dreaming.  This is only a dream.  You can wake up and get out of it when you choose."  And then I physically forced myself to wake up and leave the dream.  Quite bizarre.  Something like that has never happened to me before.
Last night I had a similar kind of experience.  It wasn't a scary dream at all like the previous one, but I was aware I was dreaming and in my dream I said to myself, "This is a dream.  Remember it as there's a message in it."
So this morning I feel compelled to blog about my dream I had last night.  What the message is, is beyond me.  I am not a dream-analyser.  The dream went like this.  I had a small mouse which I put in a large cage.  Not your average sort of cage, it was like one at a zoo that they keep larger animals in.  I found a baby animal which I thought at first was a large mouse, so I put it in the cage with the mouse.  The animal grew over time and turned into a raccoon.  I used to talk with these animals and they used to talk with me.  Strange but hey, this is just a dream.  The raccoon grew bigger and I would catch it staring at the mouse and looking at the mouse as if the mouse could be its next meal.  I kept telling the raccoon off, but it would keep staring at the mouse.  Eventually I told the raccoon I could no longer trust it so I would have to release it into the wild, which I did.  The raccoon went off and found the wild wasn't so great.  It couldn't find food and bigger animals tried to kill it so it came back and begged to be allowed back into the cage with the mouse, promising to be a strict vegetarian from now on and never look at the mouse again as a potential meal.  So I let it back in and then a mystery voice said, "There is a moral to this story."
Blow me down sideways, I don't know what it is.
Do you have any ideas?
Sigmund Freud's theory was that your dreams are an expression of what you're repressing during the time you are awake. And Carl Jung believed that dreams provide messages about "lost" or "neglected" parts of ourselves that need to be reintegrated.  This dream must be trying to tell me something.
Cindy Vine is the author of 'Not Telling' and 'Defective' available as paperbacks or kindle on Amazon.
Posted by Cindy Vine at 11:37 AM