Why Technology cannot find you Love

When technology works it's awesome.  However, when it doesn't do what you want it to it's a pain in the nether regions and I hate it and curse its invention.
What Technology can't do, is find you love.  Whatever the internet dating sites' ads may say.  Because people lie. 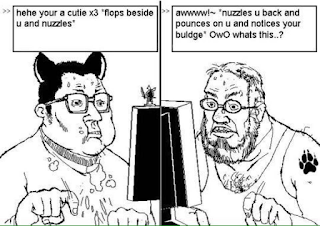 Many years ago I belonged to an internet dating site.  Yes, I confess.  Living in a new country, I thought it would be the best way to meet people and make friends.  The men were generally on the site for one thing and one thing only.  And, it was not to make friends.  I soon realised that internet dating was for men too cheap to pay for prostitutes.  They figured, get online and get the sex for free.  I used a lot of these internet dating adventures in my book C U @ 8.  Basically, people lie in their profiles and what they are looking for.  The person you meet rarely matches the person in the profile.  At times it was hilarious and at other times a little frightening.  People are just too trusting.
Now I see the younger folk on Tinder.  Similar to internet dating, still reliant on Technology.  Just a swipe and you can meet your match.  Hmmmm.  After having my daughter shove her phone in my face so that I can see self-absorbed adonises with six-packs post their selfies all over Tinder, I have not changed my mind about Technology.  If the guy really looked as good as he does in his selfie, he would have women tripping over each other to get to him.  He is either lying or on Tinder for one thing....Free Sex.  He has no intention of finding love.
Yep, I'm a cynic.
But this brings me onto another site I am trying to delete off my computer, one that I never signed up for.  One that sends invites to my friends on my email list.  One that fills up my Spam folder with messages from people who supposedly like me, viewed my non-existent profile, or replied to the messages I never sent.  This site is a sham and doesn't seem to let me unsubscribe.  Not that I ever subscribed in the first place.  This is when I seriously hate Technology that allows people to steal my information and set up fake profiles.  This is when Technology seriously sucks.
There are the few random people who feel they found the love of their life on the internet.  These stories are always pasted all over the gossip magazines.  I remain unconvinced.
Catfish is a TV series made about the lies people tell online.  You can be whoever you want to be online and tell the other person what it is you think they want to hear.  How do you know the truth from the lies?
Really, nothing beats meeting someone the old-fashioned way, without the help of Technology.  At least then you know what you are getting.  That the 36 year old six foot four hunk isn't really a married arthritic 70 year old that's 5 foot 4 and wears size 4 shoes.  (You know what they say about a man's feet!)  I say, delete all that crap and go out there and talk to people in the flesh.  If you're a fake, you'll encourage fakes.  Or flakes!  There are creeps and stalkers out there, men and women.  We have to be a lot more careful and a lot less trusting than we are.
There is more to falling in love than a hot pic, well-written profile and a computer-generated algorhythm saying you are a match!
Cindy Vine lives in Cape Town, South Africa, and is the author of The Case of Billy B, Not Telling, Defective, C U @ 8 and Hush Baby.  You can buy her books on Amazon or find out more on her website http:cindyvine.com.