Mistakes you make when Traveling

Have you ever ordered a meal off a menu because the picture looked like the meal would be delicious?  Did the meal live up to the expectations you had from the photo on the menu?
On a recent visit to Istanbul, I went to a local restaurant in a shopping mall.  They had posters of a delicious looking steak that was on special displayed all around the restaurant.  Of course all the writing on the posters was in Turkish.  As I can't read Turkish and the waiter couldn't speak English. I had to go by the picture.
BIG MISTAKE! 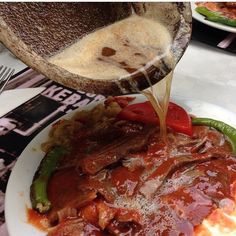 When the steak arrived my immediate observation was that it wasn't actually a steak, but rather thin slices of meat placed on flatbread.  I shrugged and decided if it tasted good, then all was fine in my world.  Before I could shovel the first forkful into my mouth, the waiter arrived with a pot filled with melted butter which he proceeded to pour over my meal.  I was aghast!  I have never been able to handle anything too oily and fatty.  Even cream makes me want to throw up.  Looking at my meal swimming in a sea of melted butter, I could feel my stomach heave.  Not wanting to waste money, I managed to pick off the slices of meat to eat, while trying not to look at the flatbread which was now sodden and soggy with the melted butter.  I bravely ate that meat while glaring at the misleading posters, fighting back the nausea.  For several hours afterwards, I felt physically ill.
The lesson to be learned, don't pick a meal based on a picture on the menu.
I guess another lesson could be not to order from a menu not written in English.  On a visit to Gabon, I went to a cute beach-side restaurant in Libreville.  The menu was in French, and the waitresses only spoke French.  My French is limited to words like 'restaurant' and 'bureau.'  I thought 'poisson' was the French for chicken, and was shocked to be served a very fishy stew with fish heads!
Maybe I'm a slow learner.

A couple of weeks ago, I was visiting Frankfurt.  Knowing that I would be arriving at the airport in time to board and I would't be able to check in luggage, I took a small carry-on and left behind my face cream, deodorant and toothpaste.  My thought was that I could buy toiletries in Frankfurt.  Also, as my residence card was about to expire, I didn't want to have any products in my bag that might draw attention to me, causing someone to ask me for identification.  One of the great things about traveling through the Schengen region, is that you aren't often asked to show identification.  But, I wanted to avoid chancing my luck.  However, on visiting the supermarket near my hotel in Frankfurt, I found identifying face cream to be a problem.  Toothpaste and deodorant were easily identifiable.  Browsing through the products on display, I decided to go with something that sounded familiar.  It said 'Creme' and 'Body Butter.'  Now I have to state, I use body butter from The Body Shop, as I find it works well on my sensitive skin.  The first time I tried the 'creme' on my face, it felt tight afterwards and stung a little bit.  The next day it stung even more and my skin started going red.  Stupidly, I used the 'creme' a third and then a fourth day.  By the fourth day my face was very red and burning.  I decided to wash my face to remove remnants of the 'creme.'  To my horror as I wet my face it started to foam.  It was at that point I realised that the 'creme' was not what I thought it was.  A closer look at the bottle showed the word 'douche' after the word 'creme.'  A German-speaking friend confirmed my worst fears.  The face cream I had been using on my ultra-sensitive skin for four days was actually Shower Gel!  No wonder my face felt tight, turned red and foamed when I washed it! 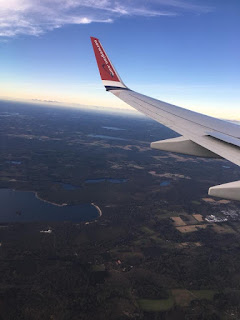 The Frankfurt visit influenced decisions I made for my Finland visit the following week.
I made three bad decisions.  The first one was to pack in my toiletries so that I didn't have to risk buying a wrong product in Finland as I can't read Finnish.  I didn't want a repeat of the 'creme douche' incident.  The second one was to send my passport away to another embassy to get a visa.  This effectively meant that I would be traveling to another country without a passport.  I didn't see this as a problem as nobody had wanted to see my residence card or passport when I left Frankfurt.  The third mistake was deciding to check-in my bag because I had packed in toiletries.
Well, the airline lady asked me for my passport when I tried to check-in my bag.  She refused to accept a certified copy of it or my now renewed residence card.  Instead, she canceled my flights right there and then.  This should have been devastating as I was leading a workshop the next day and people were counting on me.  Instead, I went to the airport Starbucks, not for a coffee, but to use their table so I could set up my laptop.  I quickly bought new plane tickets on a different airline.  I did not check-in my bag, but took it as hand luggage, my toiletries setting off the alarm.  Luckily, all I had to do was remove them from my bag and put them in a clear plastic ziploc bag they gave me.  Thank goodness nobody asked me for identification on the two flights to Oulu in Finland and the two flights back.
Desperate times call for desperate measures.
I blame this all on the toiletries!
Sometimes I think these kinds of things only happen to me.  Maybe it's because I am a risk-taker, who knows.
Cindy Vine is a South African living and working in Norway.  Cindy is the author of Hush Baby, The Freedom Club, Not Telling, CU@8, Defective and The Case of Billy B.  All her books are available on Amazon in both paperback and e-book format. http://cindyvine.com
Posted by Cindy Vine at 7:43 PM

Great work did by you. Informative and problem-solving content that users can easily digest can work for all types of blogs. When a user finds something informative on a blog, he/she is more likely to come back from your side.
Assignment Writing Service Help

Your post is very great.i read this post this is a very helpful. i will definitely go ahead and take advantage of this. You absolutely have wonderful stories.Cheers for sharing with us your blog. python training in noida

Awesome blog. I enjoyed reading your articles. This is truly a great read for me. I have bookmarked it and I am looking forward to reading new articles. Keep up the good work! digital marketing training in noida

Your post is very great.i read this post this is a very helpful. i will definitely go ahead and take advantage of this. You absolutely have wonderful stories.Cheers for sharing with us your blog
Learn cybersecurity online by peason's top-notch authers

My Name is Abhay Kumar. I’m a Blogger living in India. I am a fan of technology, design, and writing. I’m also interested in programming and blog. I would like to share articles related to SEO, blogging tutorials, WordPress Tutorial, Make money online. You can read my blog.https://www.ducatindia.com/digital-marketing-training-course-in-gurgaon