Ngorongoro Crater and beyond! 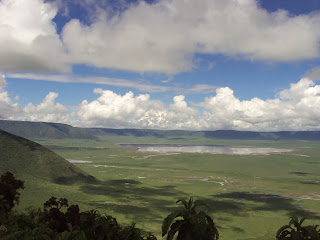 Woo Hoo holidays are ending!  Why am I excited?  Lord alone knows.  It could be because the fact that the holiday is over means that I can look forward to the next holiday, and that brings me even closer to my extra-long summer holiday in June.  mind you, it'll be winter in South Africa then.  But, it could also be because when the holiday is over then I get myself all focused and in the zone to start working on my next book!  Exciting stuff eh?
On the 30th December, Arden, Andrei and their twin boys, Siobhan and Tony all piled in my car and we headed to the Ngorongoro Crater

which is supposed to be a World Heritage site.  It's not too far down the drag from Arusha - all in all about a 3-4 hour drive from Moshi.  It just depends on how brave you are to overtake slow-moving trucks on blind bends.  It was amazing all seven of us fitted into my car.  I have a Pajero with a little Toyota engine in it.  That means, when you go up steep hills you have to think of the little engine, "I think I can, I think I can, I think I can!"  Well, my car did.  It made all the steep hills.  I sort of had to lean forward though, and whisper encouragement to the engine.
Just before Ngorongoro Crater, you see Lake Manyara

.  Apparently the game viewing is awesome there, but we left that for another day.  they do charge an arm and a leg for you to enter the parks in Tanzania.  We finally arrived at Ngorongoro and the got all shirty with us and wouldn't let us in.  They wanted us to hire a driver guide.  "Where on earth would he fit into my overly stuffed vehicle?" I asked with tears in my eyes.  Or it could have been dust, after 4 hours of singing kids I wasn't sure.  I lied.  Okay, just a little one.  I told the guard at the gate that we knew the crater, I'd been there two months before.  I didn't even know what the crater looked like, let alone been there before.  The guard asked how I'd managed the ascent before.  "Ascent?  No problem," I said, wondering what the hell the guard was talking about.  Andrei wanted to do some 4 x 4 driving and took over the crater trip.  At the next gate, they stopped us again and told us we needed a guide.  Tony piped up, "I'm a qualified South African game ranger."  He did write an exam and get a level one game ranger certificate after a 12 day course two years ago.  As the queue of 4 x 4 vehicles behind us was getting longer, the guard suggested Tony accompany him inside and complete some forms basically saying that if we left the vehicle at any time, Tony would go to jail.  Fair enough, I thought.
The descent was quite steep but not too bad, and we passed heaps of little Maasai villages and Maasai warriors on the rim of the crater.  In the crater itself, driving was no problem.  We saw many different types of game, an elephant crossed our path - I wonder if that gives bad luck like a black cat crossing your path?  While wondering along a dirt track to check out some hyenas cunninly spotted by Tony, my game ranger son, Arden announced that she had to pee.  Badly.  Unfortunately, the only toilet in the crater was closed, the road to it had been closed off.  We drove around taking some more taking photos, exclaiming at the animals, while all the while Arden's face was developing this pinched look and I swear I saw her eyeballs start to float.  Eventually, while we were admiring a zebra grazing next to the vehicle, Arden's strangled voice came from the back of the car.  "I have to go - NOW!"  As no vehicles were visible, Arden opened the back door and dropped her knickers and swung her bum out of the back of the car.  What sounded like the Victoria falls echoed through the car.  Just then, we saw a vehicle heading towards us.  "Car 100m away!" we shouted.  Arden replied that she was peeing as fast as she could.  Tony started to imagine what it would be like when he got arrested for letting a woman hang her naked bum out of the car to pee in the crater.  "Hurry!" we shouted, "Car approaching rapidly!" 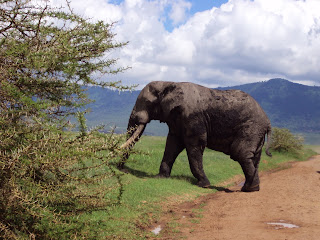 Just as the car drew level, Arden shook off the last drops and slammed the door shut.  "I had to stop three quarters of the way through," she muttered, "But I feel so much better now!"
The ascent was something else.  No wonder they said we needed a guide.  You have to drive up a virtually vertical face of the crater.  But, Andrei managed with aplomb.  He was great!  I don't think I would have been able to do it!  the crater is spectacular, you are guaranteed of seeing animals there.  We even saw lion and rhino!  Basically, we saw the big 5 bar the leopard.  Damn pussy cats hid away.  Check out my photos on Facebook of our Pangani holiday and Ngorongoro trip.  http://www.facebook.com/album.php?aid=370042&id=795715443&l=592d04ea1f
The next day we relaxed at home, went curio shopping and celebrated New year's eve by going to the Moshi club to check out amazing acrobats, dancing troupe, but by 11.30pm we were too exhausted to stay until new year and left to go home, all collapsing in bed asleep at quarter to midnight.  How sad was that!
Arden and Andrei and kids left on the 1st and we miss them.  Tony leaves on the 22nd.  We'll miss him as well.  Then it'll just be Siobhan and myself!  Ready to start our weight loss action program.
I bought a new laptop yesterday, so am ready for the year!  Hee Hah!  Have written a couple of new hubs to test it out http://hubpages.com/hub/Valentines-Day-Gifts-for-your-Dog and also http://hubpages.com/hub/Valentines-Day-Gifts-for-Geeky-Guys Check them out.
love
Cindy
Posted by Cindy Vine at 2:29 PM