After planning this children's story on my 9 hour drive back from Dar-es-Salaam, (hey, one has to think about something other than the other cars on the road or a noisy teenager singing at the top of her voice), I couldn't wait to get started with it.  So, I spent the next 5 days illustrating the story.  It didn't take too long to write.  I took photos of the illustrations, put them on Photoshop, gave them a border and wrote the text on them.  Then I saved them as a jpeg, opened a word document, inserted the jpeg images and then saved the completed word document as a pdf file.  Probably did it all the long way round, but it worked so I'm happy.  My next step, was to add all the jpegs to Movie Maker and record myself narrating the story on a digital wave recorder, then I added the audio file to the movie file and voila!  I made a movie which I've uploaded onto Youtube http://youtu.be/4KJ9AGBokTQ?a.  I've tried to embed it in this post but am not sure it has worked.  I'll see when I view the completed post, eh? 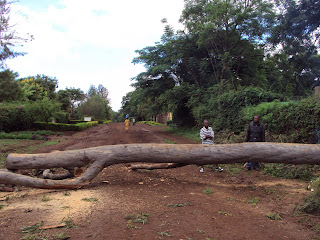 Anyway, the rain was good as it meant I couldn't go outside so I had to focus on my writing.  I do tend to get distracted rather easily.  It's what happens when you have a mind that is so full of noise.  Attention Deficit Disorder, that's me.  But Saturday, the rain was a bit too much.  Torrential downpour, I thought the house would cave in.  It started leaking around my back door of the house, and then I heard a huge crash and the power went out.  Siobhan went to investigate, she was brave enough to head out in the rain.  A neighbour two houses down, had a huge giant enormous eucalyptus tree come down across the road, effectively blocking our way out.  We were trapped!  They only removed the tree the Monday afternoon, and Tanesco braved the rain Sunday afternoon to repair the power lines which had come down, so we were close to 30 hours without power.  Of course, that meant we couldn't watch movies or use the internet, couldn't charge up the phone, pump water, have a shower.  So I just painted while there was enough light and Siobhan and I started playing Scrabble.  She's good, has inherited all my sneaky Scrabble moves.
Otherwise, we've spent the rest of the holiday just relaxing at home.  Can't believe it's nearly over!  The last quarter of the school year is going to fly as there is just so much happening, and before I know it, I'll be on my huge overland trip to Cape Town.
Oh well, have some more writing to do!
love
Cindy
Posted by Cindy Vine at 9:32 AM