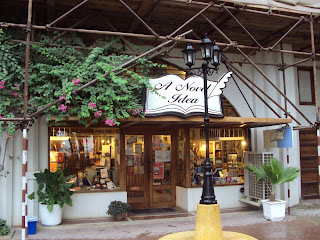 We'd heard quite a bit about Dar-Es-Salaam from people who'd been there before.  Dirty, busy, horrendous traffic.  Nobody, however, told us how civilised it is.  Especially on the Seacliff side.  Enormous mansions, beautifully tarred roads, great restaurants, shopping malls, we thought we'd accidentally left the country without realising it.  In comparison, Moshi is a one-horse town, and the horse died several years ago.  I do like Moshi though.  We don't have much traffic.  The traffic in Dar is a problem, but not nearly as bad as Mumbai.  I didn't find it dirty at all, and yeah it's the capital so it should be busy.  It was a great getaway but I'm not sure if I could live there, as there are far too many temptations to spend your money on.  I'd be flat-broke in five seconds. 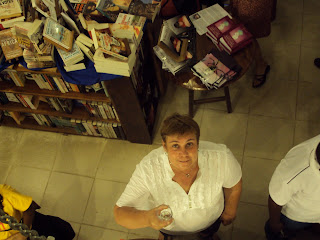 My book launch was great, A Novel Idea is one of the nicest bookshops I've been in, a great selection of books, I felt quite privileged to have my book launch there.  They're opening a branch in Arusha in June, so that is definitely something to look forward to. 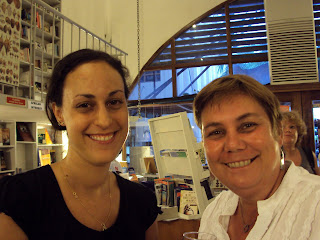 The first two nights we stayed at the Jambo Inn in the city centre.  It's very budget and has a good restaurant downstairs.  Good for one night if you are catching the ferry to Zanzibar in the morning, but I wouldn't recommend it for longer than a night.  Our last night we stayed at the Q-bar and this I recommend highly.  Double the price of the Jambo Inn, but worth every penny.  A great English breakfast with proper filter coffee is included in the price.

Of course being me, there has to be some crazy madcap adventure to our weekend away.  We once again fell foul to corruption on the roads.  What is it with me and these traffic guys?  On the way to Dar we were only stopped twice, and both times the little traffic policeman looked in the car and asked if Siobhan was my daughter.  Although, the first one actually first asked if she was my son.  When I said yes, they waved me to continue driving.  Most bizarre.  Did they think I was kidnapping her or something?
But on the way back, a loose wire somewhere in the car was telling the car a door was open, which caused my hazard lights to flash on and off all the time.  I slammed all the doors closed so forcefully, that I almost sprained my wrist.  But, that damn loose wire was still sending out the wrong signals.  We left Dar confusing all the other drivers in the torrential rain, as they didn't know which way we were turning.  There's nothing like a car not doing what it's supposed to be doing, to put me in a bad mood, which poor Siobhan got the brunt of.  My girl, I'm sorry for snapping at you when you only wanted to give me a piece of melted chocolate while I was trying to negotiate the road in the pouring rain with my hazard lights flicking on and off like a disco. 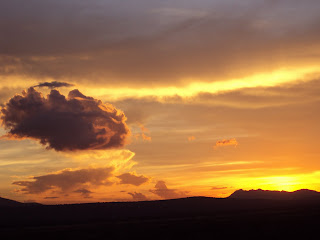 As I gathered speed, the loose wire stopped making the hazard lights go on and off, and the trip became quite pleasant.  Even the rain stopped.  Unfortunately, as I overtook a staggering truck that was going so slowly it was almost going backwards, a little traffic man jumped out from next to a 30km speed limit sign.  Now you can't overtake a truck at 30km an hour, and you can't magically change from about 80km an hour to 30km an hour in the space of one metre.  He told me he thought I was speeding.  Obviously, I denied it, so he called over his little helper with the speed camera thing.  71km an hour.  "How do you know that's my car?" I asked, noting that their speed catching contraption does not record photos of the vehicle or licence plates.
"Look," the little helper man said, and took the speed of the next car.  21km an hour.  "See how slow he's going?"  Of course, he didn't realise by doing that, he was wiping out the speed of my car.
"Well," I said with a grim smile trying to feign patience, "He's only going slow because he can see you and me dancing around in the road.  In fact, he's going so slow he's a hazard to the safety of the rest of us on the road.  He should be the one you stop and fine."
The main traffic guy didn't fall for my advanced female logic.  "So do you want to go to court, or can I write you a ticket for TSH 20 000?"  That's roughly $20.
"But what speed was I going again?  Show me?"  I knew that I had them foxed as they had replaced my speed reading with the reading from the next car.
The traffic guy laughed.  "If you go to court you'll win as we don't have your speed anymore, but think of how much time and expense fighting it in court will take?"
He had me.  His English was far too good.  "Well then, I fine you TSH 20 000 for having such a bad road with potholes, it's a danger to drivers," I countered.
He agreed with me, and by then all the traffic police were laughing and pointing to the potholes in the road.  I thought I'd won the battle, but then he produced the ticket book again.  "So, court or fine?"
Bastard.  "How about, I just give you TSH 10 000 and we forget about court and fine?"
"Sure," the greedy corrupt bastard said as he held out his hand to take my money.
Civilisation comes with a price, I reckon.  It opens the doors for corruption.
Posted by Cindy Vine at 8:42 AM

I was in Dar-Es Salaam when I was a kid - I wish I could remember it.

Funny - the standard rate here in Mexico for any traffic offence is a bribe of two hundred pesos (also $20)!

I think they don't make it to exhorbitant to ensure everybody can pay it, so they make more money in the long run!

Yes, and it's very efficient too. Everyone knows what's what, they fork it out, and on you go. I say "they" because I don't drive, but this is what the people who do, do....

Oh, I saw your kids' book on YouTube. Good stuff!