Flying from the wheelchair to see U2

Everybody has a bucket list, things they want to do before they die; I'm no exception. Near the top of my bucket list was to see U2

live in concert. I have to admit, I've been a die-hard fan ever since I saw Bono with his mullet, dressed in his Little Drummer Boy outfit strut his stuff on stage in the late eighties at the Free Mandela Concert they had at Wembley. I think it was that concert, I remember I was living in Swakopmund, Namibia, at that time. Wherever I've lived in the world, I've always just missed out on seeing U2. 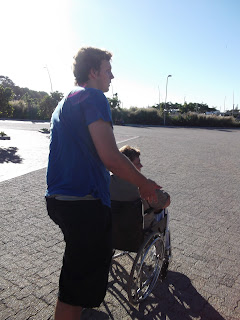 When I was diagnosed with breast cancer for the second time, my always missing U2 was set to change. They were going to be performing in Cape Town a week after my scheduled mastectomy. As I live in Tanzania, if it wasn't for the mastectomy I was having in Cape Town, I would have missed them again. As it was, it would be touch and go whether I'd be out of the hospital and in a fit enough condition to attend the concert.

Being a somewhat positive person, I purchased three tickets for General Admission Standing. I thought my son Tony and eldest daughter Kerri could accompany me, and stand on either side of me to block my new breast from getting bumped and squashed in the mosh-pit area. To top it all, I still had my drain attached, which I cleverly disguised under a loose-fitting shirt. It did make me look as if I had a tumour on the belly which wobbled from side to side when I walked, but nobody seemed to notice as I never caught anybody staring at me. Friends in Tanzania had suggested I hire a wheelchair, which I jokingly agreed to; but after only leaving the hospital on the Tuesday and the concert being on the Friday, I was starting to think it might be a good idea. 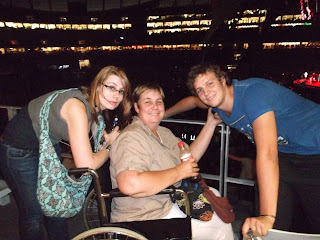 Tuesday to Friday passed in a flash! I seemed to rush from one thing to the next, no time to rest and recuperate. My mother is a bit like the energizer bunny, and staying with her in the small flat behind Tygervalley didn't give me time to take a breath. Wednesday night, Kerri and I went to see a movie - The kids are alright. We loved it! Very different, completely unique story-line, we discussed the movie in-depth for over an hour afterwards. There were some decidedly raunchy bits, which would have been extremely embarassing if we'd gone to see it with my mother. Not that she would have minded. She's a very different kind of seventy year old to the norm. Now I have to tell you, that the whole purpose of going to the movies was to collect a paper coke cup, so that I'd have something to pee in for my 24 hour urine collection. Sounds frighteningly disgusting, I know. But it would have been more discusting if I used something from the kitchen to collect my samples. The paper coke cup was the right size. And it had a lid. So if I was out and about shopping, then I could carry the cup in my bag, and just fill it when needed and decant it into the large collection container when I got home. But I digress, back to U2. 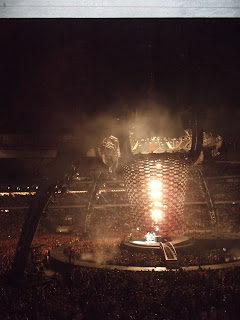 All Thursday night, I had recurring dreams about arriving at the U2 concert only to discover that I'd forgotten to collect the wheelchair. It was a terrible night's sleep, as you would expect with dreams like that. First thing Friday morning, after depositing my container of 24 hour urine samples at the pathology lab, I drove to the wheelchair hire place. The wheelchair they gave me looked old and well-used, but I wasn't going to complain. Hopefully, it would do its job and help protect my breast and the drain still hanging out of me.

There are no words to describe the excitement I was feeling about realising my dream and seeing U2 live on stage. The plan was, for Tony and Kerri to take turns pushing the wheelchair. We'd parked in the Granger Bay Undercover Parking at the Waterfront, and planned to use the Fan Walk to get to the stadium. Crowds of people were already arriving. I don't believe in painkillers and had stopped taking them the Monday. As a result, I could feel something wasn't quite right with the breast by the heat that was emanating from it, and the 'about-to-explode' kind of burning pain. I was going to see U2 live, the breast could wait another day. Neither Tony nor Kerri had ever pushed a wheelchair before. I didn't think that this would be a problem. Until Tony started speed-walking as he pushed the wheelchair, dodging in between the crowds making their way to the stadium. He was going so fast, Kerri was having to trot next to him to keep up, and I was beginning to feel giddy. The first pedestrian crossing we came to, the traffic cop manning the crossing told Tony to slow down and have patience. Tony being Tony picked up speed to get me across the crossing quickly. The kerb does have a flattened section for wheels to cross over. However, it is not completely flush with the road, there is still a small bump. Tony hit that bump at speed and I literally flew out of the wheelchair and landed on the ground. As he was behind me, I couldn't see his face, but did see the expressions of shock on the crowd around me. They probably thought I was paralysed and was wondering how they would help lift the large woman back up onto the wheelchair. I quickly scrambled to my feet and climbed back into the wheelchair. I wasn't sure if the tears flowing copiously down my cheeks were from laughter or pain. Probably a mix of both. It must have been a funny sight - this large woman flying through the air and landing on her bum on the sidewalk. Kerri was furious with Tony for being so careless, but I couldn't stop laughing. It was funny and I still laugh about it while writing this. 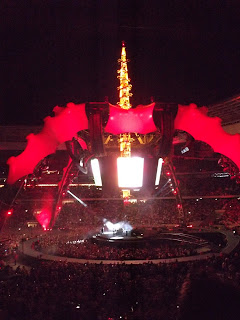 The area we were supposed to enter was not wheelchair-friendly. The righthand wheel was wobbling like mad and appeared ready to fall off at any moment. There was no way that Tony would be able to push the wheelchair with the wobbly wheel over the bumpy and rocky gravel path. I stood up and walked through the turnstiles, but the security wouldn't let Tony push the wheelchair through. They must have thought that the wheelchair was just a con, until I lifted my shirt and showed them my drain filled with blood and seroma, still attached to me. When it comes to whether or not I can go in to see U2, I have no shame. We had to wait 45 minutes, while they sent someone to find out what they could do about me and the wheelchair.

I was determined I was going in, one way or the other. Eventually, after what seemed like an eternity, the security guard returned. We had to go all the way around the stadium to the McDonald's entrance where they had wheelchair access. Tony was not amused. His hands were already covered in blisters from holding the handles so tightly. I have to say, the Fan Walk is not really wheelchair friendly. The cobbled pavement is hell for a wheelchair with a wobbly wheel. However, Tony only nearly sent me flying one more time - I managed to quickly put my feet on the ground before flying off again, before he realised that he had to pull the wheelchair backwards over the bumps. Once at the wheelchair access ramp, it was a piece of cake. Once we arrived at the stadium, we quickly found a steward and asked how we could get the wheelchair down to the standing area. They said they didn't advise us to take the wheelchair there. Kerri explained that I'd bought the standing room tickets before the op. The stewards were very friendly and helpful! I was moved to a specially-designated wheelchair area with two other people in the wheelchairs, and Kerri and Tony were allowed to stay with me. This area had an unobstructed view of the stage, no people shoving against us as the area was cordoned off. If I'd bought tickets for that level I'd have paid 3x the price I paid for the stranding tickets, so it was a bargain. To make it even better, we had disabled toilets right behind us. When I needed to go, the security would bang on the doors so that the people illegally using them would vacate them in a hurry so that I could enter. Every queue we were moved to the front! By this stage, my breast was very sore, so it was just as well I was in a wheelchair. There was no way I would have survived intact in that mosh-pit! 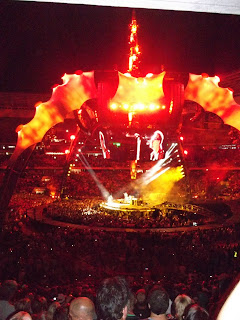 72 000 People attended the U2 concert in Cape Town, and I was one of them. It was amazing, brilliant, awe-inspiring, absolutely incredible. The 360 degrees show was the best I'd ever seen and I don't think I'll ever see anything better. The huge 'claw' set was amazing, with the light show it was unbelievable. We sat and watched, completely awe-struck!

With this ticked off the bucket list, I'm ready for the next item. Wonder what that will be? Driving around the coast of Africa! 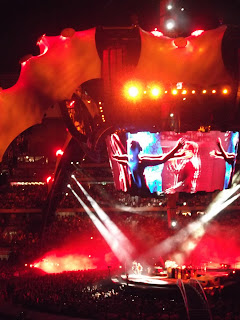 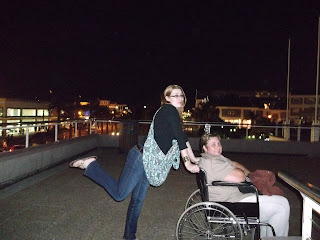 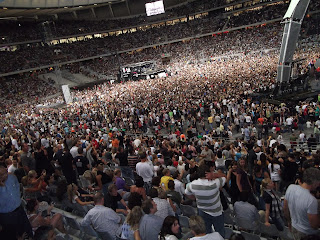 http://hubpages.com/hub/U2fromwheelchair
More photos over here. Check out Cindy Vine on Facebook to see all the photos from the U2 Concert in Cape Town

Absolutely amazing Cindy! You are one gutsy lady. I have known that for a while. The concert sounds absolutely bitchin! All the best, I love the way you write.

Thanks Ernest! It was the best concert ever!

Thanks Ernest! It was the best concert ever!

Nice!! Live the life to the FULLEST!! even in a wheelchair people can enjoy life!!!