How to stand out from the rest! 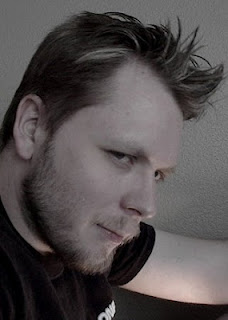 Every now and then you come across a genuinely funny person who is able to put a little sunshine in an otherwise gloomy overcast day.  Steve Novak is that person.


AUTHOR BIO: Born in Chicago Illinois, Steven Novak has spent the whole of his life creating. After attending The Columbus College of Art and Design for four years he moved to California where he married his wife. The pair have been together for nearly a decade. He likes pizza. He’s sort of a nerd. He has terrible luck and worse personal hygiene. He also hates having to write bios about himself. He thinks bios are stupid. His work can be found online at www.novakillustration.com
STAND OUT FROM THE CROWD?
When I was asked by Cindy to type up a little something about how I make my writing “stand out from the crowd,” and what I do to “make it different,” I had absolutely no idea what in the world I was going to write.
Does my writing even, technically, stand out from the crowd?
If my writing passed you on the street, would you drop the sunglasses from your eyes like Corey Haim in a terrible 80’s flick, lick your lips and watch it’s booty sway hypnotically as it walked away?
I doubt it.
Would the construction guys across the street toss it a catcall?
Probably not.
Would the cops arrest it for loitering?
There’s a decent chance.
Honestly, in my mind I’m not the least bit qualified to offer advice on this subject. I’m going to do it do it anyway. Why? Well, the only thing Phil McGraw is qualified to give advice on is being a pompous blowhard a silly mustache, and that putz has his own television show. If Phil can pretend he knows everything about things he really knows nothing, so can I.
So here it is: The best advice I can offer anyone when it comes to making your writing stand out from the crowd is to learn to hate the crowd. That’s right, I’m telling you that you need to hate more stuff. That might be contrary to what you’ve heard in the past, but I need you to forget what you’ve heard in the past. I’m not John Lennon. My beard isn’t nearly as impressive. I don’t own a single pair of tiny glasses and I’m not married to a weirdo that drove a wedge between my childhood pals and I.
I don’t want you to give peace a chance.
I’m asking you to give hate a try.
Okay, that’s not really true. It was funny though.
It also extended my word count into the 500’s.
Truthfully, when I set out to write Goats Eat Cans there wasn’t any actual thought put into how exactly I would go about making my writing stand out. I wrote what I knew and I wrote it the best way I knew how.  That’s it. I personally don’t believe there’s any great mystery to writing and in my opinion people tend to over think the process entirely too much. My best advice is to be honest with yourself and your words.
When someone opens up your book they should be reading you.
If you’re writing a horror novel, don’t try and write it like Stephen King. Leave your characters as far away from Maine as possible and certainly don’t make the lead a middle-aged writer.
If you insist on writing another damn vampire love triangle book, try and avoid making your shirtless emo-boy vampire sparkle. Sparkle vampires are overhyped Meyer’s thing. Do your thing.
If you’re writing humor, don’t try to do David Sedaris. David Sedaris is already doing David Sedaris and the world doesn’t really need another David Sedaris. You should be doing you.
Writing isn’t sex. Writing is masturbation.
Pleasure yourself first and foremost and if you’re good enough at it the world might just take notice.
Just don’t do it in movie theaters.
That’s Paul Rubens’ thing. 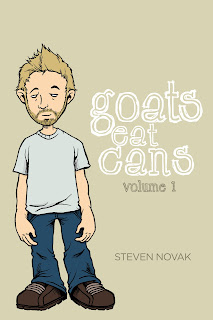 BOOK SYNOPSIS: Remember the weird kid with the greasy hair and the odd smell you went to school with? You know, the one who never talked to anyone? That creepy little jerk who sat alone at lunch? The oddball who never took a shower in gym class? The one you imagined might one day go on a shooting spree?
Believe it or not, that kid grew up.
He grew up, he got married, he never shot a single person, he wrote a book, and he even started taking showers after his workouts – most of the time.
Goats Eat Cans is his story.
Follow along as Steven Novak recounts the sometimes hilarious, sometimes hilariously painful, and sometimes painfully hilarious moments that have made his life so wonderfully frustrating. You’ll laugh, you’ll cry, and you might even vomit. No matter what, you won't be able to stop reading.
Goats Eat Cans features 55 stories, 55 illustrations, 99 luftballons and enough nonsense to keep you chuckling and giggling for days on end – or hours – or at the very least a few minutes.
WEBSITES:
http://goatseatcans.blogspot.com/
http://novakillustration.com/
PURCHASE LINKS:
http://www.amazon.com/Goats-Eat-Cans-1-ebook/dp/B007BICKXE/ref=sr_1_1?ie=UTF8&qid=1330048498&sr=8-1 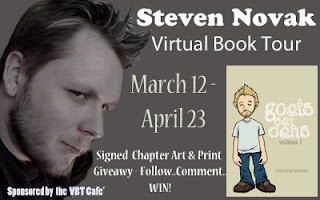