Finding the Point of View

As a writer, one of the first things you have to decide on is Point of View.  Whose point of view will you be writing from?  This isn't as easy as it sounds and takes hours of agonising over before you start on any writing.  I have used first person, multiple first person in that each character is the spokesperson for that chapter, and third person in my various novels.  For me they all have their pros and cons and I can't really tell you which one is the easiest.  You have to look at what you want to say and how best to say it.  Dana Rongione, author of YA novel The Delaware Detectives, shares how she decided on the POV for her novel. 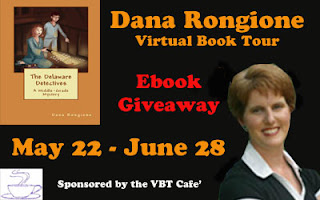 Who's Talking?
by Dana Rongione
Point of view (POV) is the perspective from which a story is being told. In essence, it is the element that shows us who is telling the story. While there are several different points of view, only a few are widely used. For now, I'd like to focus on first-person since that's what I used in The Delaware Detectives.

The first person POV uses the pronouns “I” or “we.” In a sense, you (the author) become the character who is telling the story. This is becoming a very popular way to tell a story because it brings the reader directly into the mind of your character, and therefore, into the story itself.

If attempting to write in the first person POV, it is imperative that you know your character inside and out. You must act, speak, and think as your character would. Not only that, but you must notice and pay attention to things that your character would. For example, if my husband and I were to walk into a store, my attention would immediately be drawn to the trendy clothing or adorable knick-knacks. My husband, on the other hand, would go directly to the tools or outdoor equipment, hardly noticing the things he passed along the way. Why? Because we have different interests. Our attention is drawn to things we are interested in. So it must be with your character if you are using this point of view.  (This was fairly easy for me in The Delaware Detectives because my main character is based on my niece, with whom I share many characteristics.)

When using first person POV, since your character is telling the story, that character can only tell what he or she knows. In other words, if your character is in the kitchen, she can't tell you what is going on in the living room unless she can hear or see the action taking place.

For this reason, one of the hardest things to do in the first person POV is to describe your character. If your character can only describe what she sees, personal description is lost. In addition, it is difficult to describe the character's personality without sounding like she's bragging on herself. Fortunately, there are a few ways around this obstacle, and they include:

The first-person POV is very popular, and so it would be in your best interest to master its usage. Remember, the main key is to know your character and to essentially become that character in the telling of the story.