Do you do it?  Do you write books in different genres?  I have to confess I do.  If you write what you love and you love so many things, then how do you choose what you love the most?  Experts say this is bad. Stick to one genre.  But if you come up with a great plot, fantastic characters, but it is another genre from the one you normally write, do you just let it go and fade away in the Storyland Universe?  Or do you grab it with both hands and run with it?  Cindy McDonald, author of Deadly.com and Hot Coco was faced with this decision.  Here is what she has to say about genre hopping.


HAVE I COMMITTED THE UNFORGIVABLE SIN? 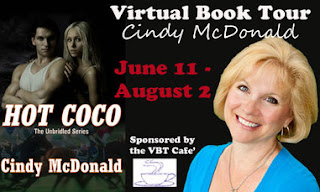 Unforgivable? Sin? Okay, now that I have your attention, brace yourself because I’m going to use the F word…formulated. It’s okay, you can stop wincing now—I’ve said it.


I love to read book series’. I love to get acquainted and spend time with a character or a group of characters and follow them through the series. That said I find that most series follow a formula, except after the third and definitely by the fourth book, it tends to stick out like a wart. With some that I’ve read it has gotten to the point where I knew what was coming by the page number or the counter on my kindle, “Okay,” I find myself thinking, “this is about where the heroine is going to do something really stupid and end up in the bad guy’s clutches…” and then as I continue following the Kindle’s counter to about eighty percent I know that the hero will show up and save her.
As I said, I love to read these series, but when I began writing my Unbridled series I didn’t want it to follow a formula. I wanted each book to be an individual, and I was warned that I was committing the unforgivable sin: genre hopping. Did I hear a gasp? Have I said a dirty word? It’s possible—very possible. My series will be an experiment to find out if readers are willing to break away from the coveted formula.


Case-in-point: My first book of The Unbridled Series, DEADLY.COM, is a murder/suspense. My antagonist, George Smuts, is creepy beyond belief; he is mentally deranged. He makes my reader’s skin crawl—they’ve told me so via emails, reviews on Amazon, and blog sites. I love George and I love the freaked-out reaction that he extracts from people. So am I obliged to provide the same/similar scenario in book two?
I have just released my second book from the series, HOT COCO, and this is more of a romantic comedy, if you will. Yes, we are dealing with the same group of characters in the same location, except for what I call “visiting characters”—those who are not part of the series they are just there for that particular story—I tend to have my own technical terms as well. HOT COCO will make you laugh, make you think, and bring you to some surprising conclusions. So far HOT COCO has received very positive reviews, but will people be confused as to what to expect from this author in book number three?


That is yet to be seen, as the third book will release in November, DANGEROUS DECEPTION, and I am back to making the reader wince, bit their lip in anticipation, and hope that the characters are able to pull through. However, I believe that I am doing a good job at blending the storylines—at least, I’m hoping so.
You may be asking yourself, “Why is she jumping from genre to genre?” Well, because The Unbridled Series did not start out as a book series, it was a TV drama. The Hollywood readers were in love with the show, problem was we just couldn’t sell it, so I made it into a book series.


Okay, so when you pick up an Unbridled book you’re not always going to get the same thing—you’re not going to know what to expect from this author because there is no formula—but I will guarantee you this: You will get a VERY good story—and perhaps that will earn me some forgiveness.
Reviewers: If you would like to read and review any of my books, please contact me at: cindys.mcdonald@gmail.com


Cindy McDonald:
For the past twenty years Cindy has helped her husband, raise, train, and race thoroughbreds at their forty-five acre farm known as Fly-By-Night Stables.
During those years Cindy has paid close attention to the characters that hang-out at the back-side of the track. She found the situations and life style intriguing. In 2005 she sat down at her computer and began a journey into writing about this life that few understand.
Cindy has recently retired from making her living as a professional choreographer and owned and operated a dance school since 1985. She studied at Pittsburgh Ballet Theatre School and with the Pittsburgh Dance Alloy at Carnegie Mellon University to name a few. She has choreographed many musicals and an opera for the Pittsburgh Savoyards.
Cindy’s Unbridled telescripts has received recommends from three film industry readers and has been a semi-finalist in the Scriptapalooza Contest, and finalist in the Extreme Screenwriting Contest, and now will become a book series. The first telescript to become a book is Deadly.Com which is available NOW on Amazon.com and Kindle as well!
Website - http://www.cindymcwriter.com
Deadly.Com book trailer: http://www.youtube.com/watch?v=i6HKi0ml9sU&feature=youtu.be
Hot Coco book trailer: http://www.youtube.com/watch?v=6uaPwcnt1S4