At the moment I have so many different meds in me I rattle when I walk.  I'm almost at the stage of opening up my own pharmacy.
Wrongdiagnosis,com should pay me.  I could be rich my now.
On the 7th January I had lipofilling injected into my left breast.  That should be where the story ends.  One week back in Tanzania I had a large abscess and very swollen lymph nodes in my left armpit.  I dutifully went to see the GP down the road.  This was his last chance after cocking up so badly the previous year, that I ended up going into septic shock and lost my breast implant.  He said it wasn't an abscess but folliculitis and that I should squeeze it morning and night to get the gunk out.  He also said I didn't need antibiotics for folliculitis.  I asked him if he was sure as my lipofilling surgery had just been three weeks previously.  He said definitely no antibiotics needed.  He's the doctor, what do I know?
My left breast began to feel hot and had a faint red rash on it.  It seemed to be getting harder, but I was so busy at work I had no time to take notice of what was happening with my breast.
Then one night acute pain in my breast made me think I'd pulled a muscle or something while trying to swim a couple of lengths of breaststroke.  Frantically swallowing painkillers turned me into a zombie for a day and a half.  I blamed it on over-exercising while trying to strengthen my right shoulder.
How wrong I was.
The breast grew slowly, sneakily, trying to avoid being noticed.  Then I got large boils on the side of the breast. 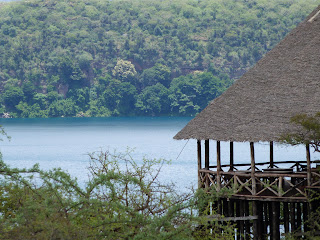 Typical, by the time I realised how big, hot and hard it was, was when I was camping in the middle of the bush with 27 children.  The pain was intense.  I was uncomfortable, could hardly move.  The campsite managers took pity on me and let me sleep in a new luxury tent overlooking the lake.
A friend phoned my surgeon in Cape Town, he prescribed a seriously strong antibiotic, I managed to get the school driver to pick it up from a pharmacy and bring it to the campsite.
Nausea.
This was not good.
I decided to go back to the local GP when I got back from the camp.  He took one look at my breast and said, "Classic case of chronic mastitis."
Seriously?  Are you kidding me?  I had a mastectomy 2 years ago.  I have no breast tissue, I can't get mastitis.  Even my healthy right breast doesn't have breast tissue.  Two bouts with breast cancer, two mastectomies.
"Then it must be a large breast abscess," he continued undeterred.  "I'm going to send you to a radiology friend of mine.  If there's fluid I'm going to get a local surgeon to cut open the breast and drain the fluid."
"Do you think this is related to the abscess I had a month ago?"
"Definitely not," he said trying to convince himself.  "It's just a coincidence."
The radiologist had a small office down a dark alley.  He felt my breast without washing his hands or wearing gloves.  This did not sit well with my soul.
He was amazed at the amount of fluid.  My heart sank.  That meant a local surgeon would have to cut my breast open like a can of baked beans.  "Oh my God!" he shouted nearly falling over with excitement.  I strained my neck to try and get a closer look at the computer monitor to see if there was a large tumor or something.  "I have no more paper!  I can't print the pictures!"
Seriously?  You have to be kidding me.
But at least he was a creative thinker.  He got his receptionist to dig through the waste bins to find a small piece of paper that could take three pictures.
There was no way I was going to let a local surgeon touch my breast.  That was settled when the local radiologist printed the pictures on paper from the waste bin.
My friend managed to stalk my surgeon in Cape Town and get his mobile number.  He called me at 11pm last Friday night and told me to get on the next flight to Cape Town.
I did.
They aspirated 300ml of fluid and gave me more antibiotics.  The breast is still not right, more doctors' visits next week.  Apparently, both surgeons who saw me stated that they were 110% sure my breast went bad because I wasn't put on antibiotics for the abscess.
What can you do?  You trust medical professionals, but they are human just like us.  They make mistakes.  Nobody is perfect.
Cindy Vine, a breast cancer survivor, is the author of Not Telling, Defective and C U @ 8.
Posted by Cindy Vine at 10:47 PM

Cindy I'm so sorry you continue to be misdiagnosed. It's really reprehensible, and I hope you are able to find better care.