J.M. Griffin does it again, bringing us a saucy mystery filled with fun, food, love and murder.  These bodies keep piling up and Melina has to find the killer to clear her name.  Add in love interests for some spice, throw in a corpse or two and bake at 200 degrees until you have a heavenly loaf of a book that will have your mouth watering for more. 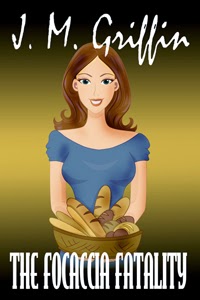 The Focaccia Fatality BLURB:
Melina Cameron is single, and looking. For a date. Not another dead body.

Her former flame, the sexy Scotsman, Aidan Sinclair, went MIA after he proposed a few months ago, so Melina isn’t wasting any more bread and tears on that one! When hunky police detective Porter Anderson asks her out, she says yes. She could do worse than dating a cop. She and Porter already have a lot in common given her penchant for finding dead bodies.

When high-ranking politician Vincent Gallagher hires Melina to cater his swanky party, and specifically requests her famous focaccia, Melina looks forward to the event, and the potential new customers it could bring. Not to mention, flirting with the cute waiters. But two things happen on that fateful night that could change the course of Melina’s future. First, Aidan walks into the party with a tall, sultry blonde. Second, that same tall, sultry blonde winds up dead, and Melina is the one who discovers the body!

Now, Melina has to figure out how to stay away from Aidan, and figure out who killed the blonde, or she might be the one to take the fall. 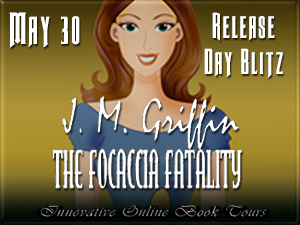