Give them enough rope

You can guide and advise people up to a point, and then you need to take a step back and let what unfolds, unfold.  My Granny used to say, "Give them enough rope and they'll hang themselves."  Now I am not a psychopath who enjoys being surrounded by decomposing bodies hanging from all the trees in the neighborhood like funeral flowers sticky-taped to the branches.  I actually do want people to succeed and not end up as a corpse in a tree.  Imagine all the flies they would attract?  But I digress.
You can advise your children until your face turns blue and you look like a not so distant relation of the Smurfs.  But at the end of the day, some of your advice will sink in, others will get flung back at you as an accusation, and your children will make their own decisions.  As a parent you can only do so much.  You can't watch over them every second of the day as you have to work so you can afford to buy them all the stuff they want.  Sorry, need.
This whole thing about needs and wants.  When we lived in NZ we often used to go to a shop called The Warehouse.  ("The Warehouse, The Warehouse.  Where everyone gets a bargain." Is the catchy jingle I hated.  No bargains when you take your children with you into that shop!  And what is it when things are cheap or marked down that we feel compelled to buy them even though we don't need them?)  Anyway, initially my young son always 'wanted' the expensive toys.  When I always responded with "Those who want don't get."  (You can see what a nice caring mother I was.)  He changed it to "Mommy I need it."  And then there always followed a justification of why he needed it.  Then I would say he could pick one toy.  He would come with a toy that cost over $300.  Obviously, as a single mother always on the bones of her arse, I would respond with something like, "Put that back are you crazy or what?"  He would then come back with something that cost $100 and get the same reaction.  Then something for $50.  Finally, he would arrive with something that cost $10 and I would agree to buy it, only too relieved it never cost $300.  Not forgetting that I had said that I would not be spending more than $5 on a toy when we pulled into the parking lot.  It took several months before I realised that it was the $10 toy he wanted all along.  And the $300 toy he would be bringing too me was part of his elaborate selling technique.  (Interestingly, he has made a career in sales.) 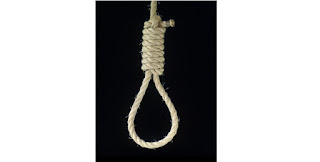 So when they ask if they can have a barbecue party and you explain that as you live in a tutor centre where you also work, the place is not set out for entertaining.  Like we don't have a lounge or a dining room.  Those are classrooms.  But because you don't like being accused of being unsupportive, yadda, yadda, yadda, you cave in and say "Okay but any mess and you clean it up."  Walking out this morning to make myself a cup of coffee, I noticed a) the state of the kitchen b) all the bottles and glasses lying around two of the classrooms c) bottles outside.  Looks like it was some barbecue!  My initial thought was, "Thank God I don't have to clean up this mess!"
Give them enough rope hahaha.
This works with all relationships.  People you live with, work with etc.  And also people who try and destroy your good name or people who enjoy spreading stories about others.  The story-spreaders are a perverse lot.  They take a small glimmer of truth, or something they think they heard, and they twist and turn it so that it is manipulated into something you don't even recognise.  Like someone who systematically steals your possessions, these people steal your truth.  They fall into the same category.  Your initial reaction might be to defend your honour, make people aware of the truth, confront the person stealing your stuff.  But if you give them enough rope they will hang themselves.  The thief will get too clever and slip up, and the rumour-monger will be found out and exposed.  The truth will out.
So instead of buying a sword or a gun to attack with, rather just buy some rope and leave it there and walk away.  Their behaviour and decisions are their choice, not yours.  They have to take responsibility for their actions.  They have to live with the consequences and you have to move on.  Don't try and own what they've done.  Don't let the injustice of it all hurt you.  You know the truth and that's what matters.
Cindy Vine lives in sometimes sunny Cape Town South Africa.  She is the author of The Case of Billy B, Not Telling, Defective, C U @ 8 and Hush Baby.  All her books are available on Amazon in both paperback and kindle format.
Posted by Cindy Vine at 10:05 AM

Excellent and oh so true!

Yes, you can give them the rope, if you want. Or... you can just say no. Saying 'no" gets easier as you practice it.

Absolutely true and brilliantly written. I am grateful that I am able to proudly say "I know Cindy Vine and she's totally awesome!" You're an inspiration to many, me included. I know sometimes it gets tough and you wonder if it's really worth it to keep on fighting. The answer is an emphatic YES! You're far too talented and have come too far to ever give up! May God bless you abundantly, you definitely deserve only the best from now on! ��