The Hidden Advantage of Having a Big Bum

For most of my life I thought that having a big bum was a curse.  Two large bags of fat to sit on.  Jeans that never quite fit.  A mission to walk sideways through a narrow space.  Although there was one boyfriend many years ago that said I had a sexy bum but if I remember he was quite drunk at the time.  So in all probability his vision was blurred and he thought he was seeing double, when actually he wasn’t.  Sad but true. 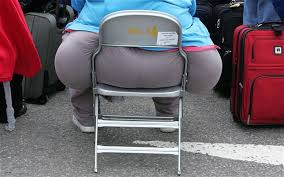 Don't get excited, that's not my bum but it could be after watching Jamie Oliver's Sugar Rush on the plane.  I'm thinking twice about my sugar intake now and the sodas I drink.  This Coke I am drinking might be the last.  This is just a random Google bum.  But this is what my bum feels like on airplane seats.
Bums have suddenly come into fashion thanks to the Kardashian sisters.  Big is now beautiful in the eyes of the masses.  Some people are even getting butt implants. ( If you contact me I reckon I can give four people butt implants from my bum.  You can get them for free, just pay for my surgery to remove my slabs of lard.)  I have to say bumless bums are quite unattractive.  You know the ones where people are completely flat in the buttocks area so that their jeans sag.  It looks almost as if they were jumping onto the Metro and the doors closed on their protruding butt slicing the excess off.  Hey, maybe I should try that?
Besides being a slave to fashion and having a big butt, what could possibly be the hidden advantage you are probably asking.  Well, it's not to rest your backpack on and spare pressure on the small of your back.  (Mind you, a big bum does help with that!)  Let me tell you a little story that will illustrate the hidden advantage of having a big bum.  This was something I had never previously considered.
When I checked in online for my flight to Vienna, it did not give me the option to select my seats.  On my boarding pass it said "Seat - None.  At first I found this quite distressing, then I thought maybe it was because I had been randomly selected to sit with the pilot.  So when I went to the Online Check-in Counter to drop off my bag, the flight attendant said, "Sorry the flight is full so you have to have a middle seat." 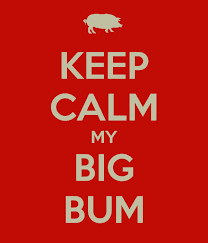 Then he smiled his simperingly sweet fake smile as if he really cared that I would be spending 9 and a half hours doing my sardine-in-a-can impersonation.  "I'm afraid on both the flight to Dubai and the flight from Dubai to Vienna you'll have to have a middle seat."  It had just got worse.  Now the 6 hour flight to Vienna would also be cramped.
I flared out my butt cheeks like an ostrich fluffs out their feathers before they attack.  "I'm sorry but I have a really big bum.  Can't you find me an aisle seat?"
He glanced at my posterior regions and reached for the phone.  "Hello, we need a disability seat," he communicated with his supervisor, nodding at me as if we were in some kind of secret conspiracy.
"I can give you an aisle seat on both your flights.  Enjoy your trip!"  And he handed me back my passport with the two boarding passes.
For a minute I stood there staring at him, not sure whether to be insulted or impressed.  Although I have often cursed my over-sized bum in the past, I had never really considered it a disability.  Now I am wondering if I qualify for the disabled sticker for my car so that I can get the good parking!
Cindy Vine is an author and teacher who lives in the beautiful city of Cape Town.  She is the author of Hush Baby, C U @ 8, Defective, Not Telling and The Case of Billy B.  All her books are available on Amazon in both Kindle and Paperback format.

That is so funny Cindy, best you take advantage where ever you can.
Safe flight - next time ask them for 2 seats.
xx

Brilliant as usual.
Maybe you could blog about the bath incident��

The moment they started handing out special passes for the disabled is the moment everything about ourselves that we dislike the most became a potential advantage.

I once was able to get a client off from having to pay child support just by proving he was so stupid that he was an actual moron. Mind you, if he had been merely normally stupid, it would be no excuse.

What would be a liability in a sane society somehow becomes an asset in our modern world. But this kind of thing has a price that eventually comes due.