Let me start off by saying that I am not American.  I don't live in America but I have visited there once.  Of course that does not give me the right to comment on these presidential elections and I accept that.  But I am going to give my opinion anyway.
In previous elections, I have to confess, I have neither followed them or particularly cared who won them. 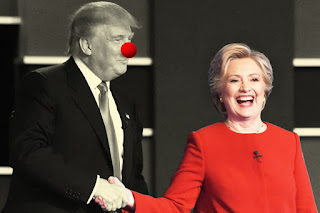 US Elections to me always seemed like a lot of money spent on campaigning that could have been better spent on education or enriching lives.
But this year it has become better than any Reality TV Show currently on TV.  I find myself watching the news to follow the election, getting up early to watch the debates and what I see is unbelievable.
Who would have thought that America would have a presidential race with characters straight from a Hollywood movie about a tinpot African Republic?
The intrigue, the scandals, the corruption, hacked emails, derogatory comments, calls of rigged elections, and there are still ten days to go!  What more can surface?
Americans want change, that is evident.  But do they really want trumped up change?  Clinton does not bring the change they want, she is too same-old, same-old for many.  Her husband cheated on her in a very public way, yet she forgave him.  Most women would never have been able to support Bill like she did.  Which begs the question, is it because after all the years she is still madly in love with him?  Monica Lewinsky would not have been his first.  She's the first one that made headlines.  If a man is a cheater he'll always be a cheater.  The same goes for Donald Trump.  Why did Clinton turn a blind eye on her husband's infidelities?  Was it because she already had her eye on the bigger prize - becoming president of the United States?  It does prove that she has stickability though.  Donald Trump has been married three times.  No signs of stickability there.  And the rumours of his groping and derogatory comments about women - he's a cheater.  Of course he did and said those things.  He has an inflated view of himself as being a sexy beast.  Seriously?  With that fake hair, fake tan and make-up.  Swamp beast more like.
I do believe that every time he steps onto a public platform, his Republican puppetmasters cringe.  They have no control over what comes out of his mouth.  Actually, it is evident that neither does he.  Whereas, Hillary is always carefully controlled and contemplated which is what puts people off of her.

So is Donald a clown or a genius?  Personally, I believe that he is a clown but his Republican puppetmasters are genius.  He has time and time again exaggerated and lied about facts.  He has consistently made himself a laughing stock.  He does not have well-thought out policy.  He is so full of his own self-importance he doesn't believe he needs to.  He honestly believes people will vote for him because he is great.  He has to be one of the most thick-skinned, self-absorbed people on the planet.  So how on earth did the puppetmasters in the Republican Party let this uncouth, obnoxious, unfit clown get this far in the election process?
Well, as Shakespeare would say, therein lies the rub.  People want change.  He says what people think but would never actually dream of saying out loud because it would be deemed racist, discriminatory or politically incorrect.  Donald Trump doesn't care.  He's a showman.  He deliberately antagonises to get a reaction.  Bad press is better than no press.  His party opposition all fought against him using traditional rhetoric focusing on the issues.  Exactly what Hillary does.  The people don't give a shit about clever political speak.  They want change.  They think Donald Trump is a joke.  Can't believe the things he says but they continue to watch and secretly support him because they are being entertained.  And, they believe that he will shake up things in Washington.  Whereas Hillary won't be shaking anything.  Don't get me wrong, I like Hillary.  If I was American I would probably vote for her as try as I might, I just cannot take Donald Trump seriously.
However, the puppetmasters believe they are onto a winner and they may be right.  The Republican puppetmasters are the real geniuses behind Trump.  They want him to go out there and make an ass of himself.  They want him to entertain and say the wrong thing time and time again.  Because if Hillary Clinton wins, they have used Donald's snide and sarcastic comments to undermine her before she even steps foot into the White House.  They have sewn the seeds of discontent.  People are going to believe she is corrupt and just as unfit as Donald.  They might vote for her as they think she is a better option than Donald, but they will never support her.  The Republican puppeteers are thinking longterm.  Create a sea of discontent, anarchy and mayhem and then step in when the presidential term is over with a real candidate who will clean up the mess.  Like Donald, Hillary is being used.
Oh and I do agree with Trump on one thing.  I do believe that CNN is very biased against him and very pro-Hillary.  They downplay the Hillary emails and capitalise on anything negative about him.
Whatever happens, the next few years are going to be very entertaining viewing as this Reality TV Show unfolds.
Cindy Vine is a South African teacher and author living in the beautiful city of Cape Town.  Cindy is the author of the page-turning novels The Case of Billy B, Not Telling, Defective, C U @ 8 and Hush Baby.  All her books are available on Amazon in both print and kindle format.