Why do People Bully?

Statistics show that 1 out of every 2 people will have experienced bullying of some kind by the time they turn 20.  That's a frightening statistic!  Unfortunately, bullying doesn't miraculously stop when a person turns 20.  Many adults are bullied by their spouse, so called 'friends' and even at their place of work.  Bullying is not limited to children's school playgrounds.  Bullying is everywhere and little is being done to stop it.  Bullies are not being held accountable for their actions.
And it starts at the top. 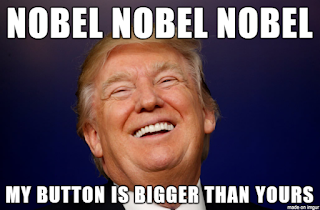 Which brings me to Donald Trump.  He's the epitome of a bully and it seems to be okay.  Calling people names, giving them nasty nicknames, belittling them, and posting it on social media is nothing more than cyber-bullying.  Imagine a whole generation of children using Donald Trump as their role-model and mimicking his antics on social media.
Scary stuff, isn't it?
So why do people bully others?
Are they all just sadistic sociopaths?
Or is there an underlying reason for their behavior?
These are the ten top reasons why people bully
1.  Jealousy.  The bully could be jealous of your popularity, your relationships, something you own or wear, your intelligence, your looks - basically anything you have that they feel they don't.  Therefore, to compensate for their lack they'll put you down or make you pay.
2.  Sucky home life.  Some people feel the need to share the suckiness of their life with others.  If things aren't going so well at home, they might inadvertently create that same environment at work.  Or they might feel if their life is a misery they may as well make everyone else's life a misery.
3.  Low self-esteem.  There are those who feel that they are not good enough.  So they try and crush all those around them to make themselves look better.
4.  Power-hungry narcissists.  These are the control-freak types who are addicted to power.  There is no reason for them to bully other than the power-rush it gives them.  They just thrive on lording it over everybody.  It's all about their ego.
5.  Stress or trauma.  Some bullies start acting out after they have experienced a traumatic event in their life or are under stress.  They project negative behaviors to try and disguise what is going on in their life.
6.  Aggression.  Some people are just mean and they enjoy hurting others.  No other explanation needed.
7.  Attention-seeking.  Then you get the bullies that just want people to notice them and want to be the center of attention.  The attention junkies.  They will do anything to get a laugh or to get noticed, even if it involves putting someone else down.
8.  Victims of bullying themselves.  Many bullies were once bullied themselves.  Their parents instructed them to fight back, so bullying others is a kind of a defense mechanism to protect themselves from ever being a victim again.  Bully them first before they bully you.
9.  Acceptance.  Some bully others so they can be accepted into the popular group, or because they think it might give them a higher ranking in their clique.  This is a kind of pack-mentality.
10. Lack of empathy.  These bullies pick on people who are different in some way.  Often they don't understand how it feels to be a little different, so they will ridicule others out of ignorance.  They pick on others because they think it is funny.
Whatever the reasons behind the bullying, it must stop.  The long-term effect bullying has on a person's psyche is phenomenal.  It will impact current and future relationships.  It might even become so bad, that the bullying victim decides to seek revenge.  If you are being bullied, then you need to report it to someone.
Cindy Vine is an author and teacher who has experienced bullying in all its terrible forms.  She is the author of Not Telling, Hush Baby and Defective.  Her new YA novel, The Freedom Club, has just been released.  All her books are available on Amazon is both ebook and paperback format.