Welcome to my BookWorld! 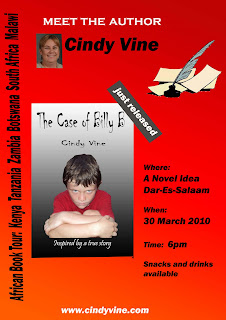 There are times in my BookWorld when I feel as if I am finally getting somewhere.  I've managed to start to put my idea of a Book Tour into fruition.  I had this idea, seeing as I'm driving down to Cape Town from Tanzania, I may as well stop at bookshops along the way, and do a sort of an 'African Book Tour.'  The notion sounded rather romantic I thought.  Well, I have finalised my launch of this African Book Tour, it will be held at A Novel Idea in Dar-Es-Salaam on the 30th March 2010.  They are talking about getting in television and newspaper reporters, and while this sounds exciting, I am quite nervous.  I've never done anything quite like this before.  My book signing in Nanjing was small potatoes compared to this and they are treating me slike some kind of a celebrity, which frankly, I find quite frightening, being the quiet and reserved type of person that I am.

No sooner had I fanned my face as it was overheating with excitement from the Dar-Es-Salaam news, than I discovered the most amazing exciting thing ever on Amazon.com.  Someone has put up a great review for The Case of Billy B

Based on a true story, this is a fictionalized account of one boy`s history of child abuse. Born with a cleft lip, ignored by his mother for the first six months of his life, she walks out on him and his father. His Army father is now faced with the task of raising Billy by himself, trying to keep a roof over their heads, and feeding and taking care of Billy while trying to further his Army career. Finally, realizing there was no other choice, he leaves the service and vows that he and Billy will make it.

The women he goes out with only have one thing on their mind... Marriage. Billy`s dad finally becomes consumed with two things in his life,beside Billy, Sex and Vodka. Unable to hold a job, he is always on the move. Ending up in Michigan, he meets up with a woman who runs a day care center. Infatuated with Chris, she is very abusive toward Billy, becoming a very real threat in their lives. Not only does Billy suffer the abuse of Stella, his father is not much better. Mentally, Billy has withdrawn into himself and has seen and endured more then any child his age should.

One has to read this book with an open mind to see and visualize the sheer torment that this young child endured. Called a freak and a misfit, can there be any help for this struggling father and his son? As he and Billy are continually stalked by Stella, it seems Billy becomes a pawn in the game of survival. Can Chris save himself and provide a stable home for them.

I had tears in my eyes reading this just wanting to hold Billy and show him that there was love in this world and no need for the suffering he was going through. The ending of the book left me with open minded and cries sequel. This book is highly recommended, but be prepared for coarse language and sexual content. The book contains material not suitable for those 17 and under.

Besides all the good The Case of Billy B

This week is going to be a busy one as we have our evaluation visit from the IB.  Hope your St Villainstine Day was awesome!
love
Cindy
Posted by Cindy Vine at 6:59 PM