Heading back to Kilimanjaro

All good things come to an end.  Our holiday in magical Cape Town is over.  In the morning at 6am, we start our long drive back to Kilimanjaro.  The car is packed, just recharging the camera batteries, putting our clothes for the trip into day packets and then we need to seriously sleep.  Correction, I need to sleep.  Siobhan will sleep along the way.  I've made sure that there is enough space for her chair to go back.  Our car resembles a packed Zimbabwean bus minus the chickens and goats tied onto the roof.  Behind the front seats there is a solid wall of clothing, linen, toys, kitchen utensils, and other crap we think we desperately need back home in Tanzania.  The challenge that lies ahead, is going to be getting across the borders of 4 different countries without paying duty or bribes to corrupt customs officials. 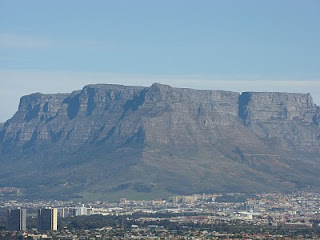 This is the first time we haven't done too many touristy things in my beloved mother city.  Sorted out Tony's flat, saw him settled (his first night there he returned home from a club to find two dead bodies, a shot up car and a horde of policemen in the road near his block of flats.)  That took up a good part of the holiday.  Then we also raided our storage facility and decided on what to keep in storage and what we wanted to take back with us.  Have to say, we are taking back enough clothes to clothe the whole of Moshi.  Siobhan always loves fashion and has been very frustrated having to wear the same clothes twice a week for the past year.  The big thing, is that we are taking back summer clothes which we had a sad lack of the past year.
Had my first sem-run-in with customs today.  Had ordered some of my latest book to give family and friends here, thinking it would be cheaper to ship to South Africa from the US than it is to Tanzania.  Boy was I mistaken.  Not only is shipping more expensive, but the customs here grab hold of the box of books, and won't release them until you pay duty, vat and a clearance fee.  I managed to b-s my way out of the duty when I saw they had opened the box up upside down.  I knew that the invoice was always on the top of the books, but seeing that they had opened up the box from the bottom, I told them the books were a gift from my publishers.  "See," I said holding the back of a book up next to my face.  "This is me, I am the author."  After scrutinising my face and the author picture on my book, they agreed that I was indeed the author, so didn't have to pay duty.  But I still had to pay vat on the value of the books.  I made up a ridiculously small sum which they accepted, and paid their $3 handling fee on top of that.  Total outlay $10 to collect my books, even though I had to fork out a lot for the shipping.  Never ever will I ship books to South Africa again.
When I got back to my car, which was already packed to the brim ready for tomorrow's trip, it was surrounded by custom's officials, some with cute golden labradors.  "This is not a South African registered car," one very astutely pointed out.  "Is it from Zambia?" he asked pointing to the Tanzanian flag on the number plate.  Granted, he might have been fooled by the 'I love Zambia' sticker on the back of my car, but Zambia?  Obviously the education system had failed him and I knew then he was not one to be trifled with.
"Tanzania," I said pleasantly with one of my winning smiles.  "As you can see, I came to fetch some of my things to take back to Tanzania with me."
"Passport," he sneered holding out his hand.  Now seriously, how many South Africans drive around South Africa with their passport.  In fact, many South Africans don't even have passports.
"I don't have it with me, it's with my things at my brother's house in Rondebosch."  I quickly replaced my winning smile with a perplexed look.
"Oh, are you South African?" he asked, lightening up a little.  My South African accent is so thick, you can cut it with a knife, this guy was very slow.  I nodded, trying my best to look demure and intimidated at the same time.  "Okay, you can go then.  But you better keep your passport with you, as other cops might stop you and ask what with you driving a foreign car and all.  So, what is it like in Tanzania?  Is it peaceful?  Are you working there?"  First he was so aggressive and now he wanted to make chatty conversation.  I bared my teeth in what I hoped was a pleasant grin.  The labrador he had on a leash lay down and rested its head on its paws.  It obviously found my car boring, probably because I wasn't a drug smuggler.
Goodbyes to friends, but we'll be back in December when the weather is better.  The World Cup was awesome, I was one of the millions proud to be a South African.  Hopefully, our rugby boys will improve the weekend.  Not sure when I'll have internet access again to update you about our travels.  But, I'm recording all the information and am really excited about The Great Mountain to Mountain Safari, the book I'm going to write about this mammoth trip.  Have done quite a bit of work on it already.
Thanks to my brothers for looking out for me here, getting my car sorted and serviced and letting us stay with them in Cape Town.  Thanks also to my Mom and Jem for helping to sort out Tony.  Ten days minimum of travel lie ahead.  Hopefully, not too many adventures, but they are always good to write about in a book!Sayonara!
luv
Cindy