Just when it seemed we’d never be able to get away to start our holiday in Kenya, the fundi called to say our car was ready! We were already a day late and when he called me to collect the car it was already afternoon and I still had to get a new tyre put on as driving to Kenya on a tyre with a big bump sticking out of it would just have been asking for trouble. Decisions, decision, decisions. Should we leave straight away in the afternoon or leave bright and early the next morning? 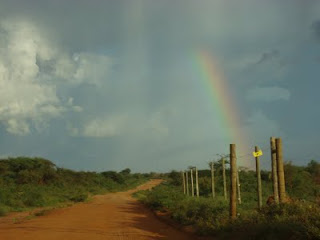 Being the person I am, I thought why wait? Let’s go as soon as the new tyre is on. It was when the tyre fundi was showing me a nail sticking out of the left front tyre that I happened to glance up and notice that the new car licence I’d paid for in December while I was away had never been put up. I’d been driving around for close on 4 months with a car licence that had expired the beginning of December! Not good, I’d been lucky to get away with it! Now I had a new decision, should I chance driving in a foreign country with an expired licence, or should I wait a day to sort it out? Being somewhat of a risk-taker or just plain stupid (I confuse the two) I decided to chance it. I wasn’t even sure we’d get through the border with an expired licence, but it was worth a shot! 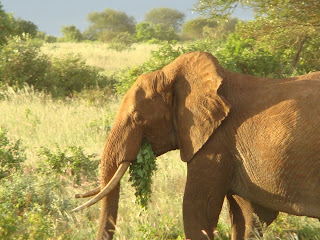 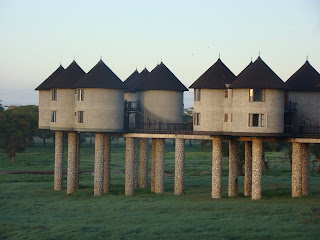 Luckily, we managed to get through both border posts incident-free. Then the next snag hit. Because of my aging and failing eyesight, I hadn’t read through the Kenya Lonely Planet as the print is way too small for me, so I actually had no idea where to go. We were in Kenya but I had did not know which direction to head in. Siobhan grunted and groaned and opened up the Kenya guide and tried to scrutinise the maps. “Just head straight, I think, but you know I’m no good at maps.” I’d thought her map-reading skills had improved considerably on the 11800km road trip we’d undertaken last year, but obviously she still lacked confidence in her map-reading abilities. The road, dry red dusty and bumpy stretched before us. For some strange reason, I’d assumed the highway to Mombasa would be tarred. A narrow pot-holed dirt road was not what I’d imagined a highway to be. We stuck to the road as the hours ticked past, not sure that we were on the right road or even heading in the right direction. The thought did briefly enter my brain that I always seemed to get into these kinds of adventures, but thank goodness it soon passed before I could dwell on it. We passed a herd of elephants on the left hand side of the road and I wondered where the hell we were. At that point I did berate myself for leaving Moshi at 4pm to drive blindly into the unknown. Darkness was quickly setting in and I had to swerve to avoid a mother elephant and her calf walking across the road. It was with almost tears of relief that we spotted a large sign up ahead saying that Sarova Saltlick was 15km further on. Only then did we breathe properly, we were on the right road after all! We had to stop at the Taita Hills Hotel to check in and pay and they told us that Saltlick was a further 7km through the game sanctuary, but we mustn’t worry, the guard at the gate would give us a map. Driving in the pitch dark, surrounded by wild animals, we drove from post to post as indicated on the map, stopping to read the post numbers to see if we were driving on the right track. At exactly 7.30pm we parked the car at Saltlick. Relief, just in time for a buffet dinner. 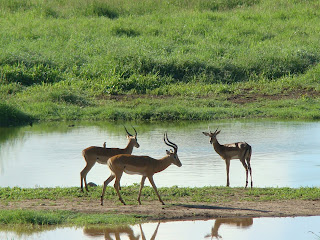 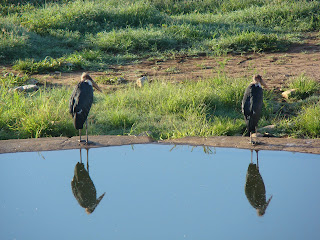 Saltlick is fantastic and worth every penny. It is built on huge stilts around a waterhole. In the dark we could make out the big bulky shapes of elephant and a large herd of gazelle lying down while a lone male stood watch. The room was luxurious and I felt like some sort of a celebrity staying in such a flash place! Dinner was superb, the staff professional, efficient and friendly. A fantastic night’s sleep had us ready to head to Mombasa. But first, an amazing buffet breakfast! You get full board at Saltlick. We saw some cool birds, and then some gazelle came to the waterhole for a drink. So peaceful and serene, we might stop off there on the way back. 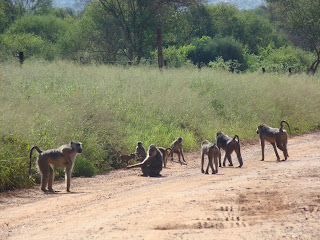 In daylight it was easier to find our way out of the sanctuary, and it wasn’t long before we were back on the main dirt road. After about 30km of bumping, jarring and shuddering, we were wishing for a tar road. Someone up there heard our prayers because all of a sudden the road was tarred, but after driving 100m we were wishing it was a dirt road again. The tar was so pot-holed and broken up, that I elected to rather drive in the dirt off the road. Finally at Voi, the tar improved and from there to Mombasa it was quite good and we could pick up speed.
Mombasa was hectic with long queues of trucks everywhere and I did the whole illegal thing, and overtook a whole lot of them by driving on the dirt sidewalk. I’m sure we should have by-passed Mombasa, but somehow we drove through all the parts of it with heavy traffic, getting completely lost and having no idea where we were, I just kept heading in what I thought was north, and by some miracle we accidentally made it onto the right road to Watamu.
Now at Watamu, with its beautiful beaches, let the holiday begin!
Posted by Cindy Vine at 8:35 PM

Sorry you had so much trouble on your way to vacation, but glad you made it. Have fun! Enjoy the beach!

Sounds like you're having a hectic but grand adventure! I definitely have to get overseas soon!

Waiting for the next episode Cindy, I hope you have a photo of your room at the hotel. I loved this!

Kenya was fantastic, no two ways about it!