The worst part of a holiday is that it ends.  I think I could easily live the rest of my life on holiday.  Unfortunately, commitments like children mean I have to keep working.  But I can dream.  How wonderful it would be to have enough money to be permanently on holiday. 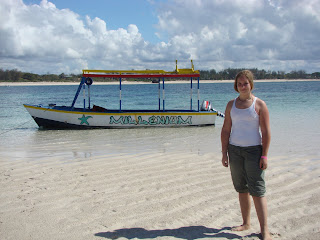 Watamu was wonderful!  Kenya is a great destination.  It's about an hour and a half north of Mombasa depending on how fast you drive, and about half an hour south of Malindi, along the fabulous Kenyan coast.
We stayed at Turtle Bay Beach Club, all inclusive - all meals, drinks, snacks, etc, etc for approx $150 a night for the two of us.  It was a bit less, but it's too early in the morning for my head to attempt conversion sums.  That includes the use of their hobie catamarans, kit surfers etc.  Siobhan even went scuba diving in the open sea and is now hooked.  She swam with two stingrays.  Seeing that she now wants to get a diving certificate, I guess that being permanently on holiday is not an option and I'll just have to keep working so I can keep paying. 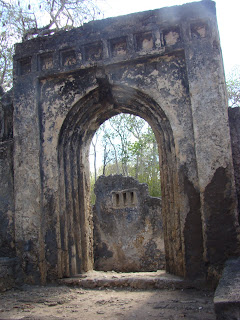 Being addicted to history (I wonder if there's a 12-step program for it) I was keen to explore the Gede ruins about ten minutes drive from Turtle Bay.  Interesting, seriously.  The city state was abandoned when a drought caused wells to dry up, and people to die of disease in the 17th Century.  It must have been magnificent in its day.  Apparently, the people of Gede were peace-loving and refused to take sides when the Sultan of Mombasa was having a go at the Sultan of Malindi and they got caught in the middle.  Another reason why the city was abandoned.
After that little taste of history, I was determined to continue following the Portuguese around the world, having already been to Angola, Mossel Bay, Mozambique, Goa, China and Malaysia.  While Siobhan was diving on the coral reef, I headed north to Malindi which was where Vasca da Gama had stopped just before he visited Goa in India for the first time.  I checked out the cross he put up in 1498 and the chapel he built the same year.  A tiny limestone and thatch building, but the first church in East and Central Africa.  Very cool.
Much to Siobhan's (and probably mine) chagrin we had to leave Watamu, vowing to return whenever we could. 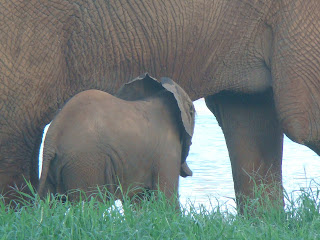 We stopped off at Saltlick again on our way back after taking a shortcut through the back of beyond on some hair-raising dirt roads.  This time we saw the most amazing sight, a herd of over 40 elephants, many tiny calves that were still small enough to walk underneath their mother's bellies, descend on the watering hole.  Siobhan took the most stunning photographs, and I told her she might need ton re-think studying drama and rather focus on photography.  I made the silly mistake after being so caught up viewing her great shots, that I stupidly promised her a fantastic camera for her sixteenth birthday in September.  I guess that means I have to add a few more years onto my working life before I can retire to a cottage next to the sea.
You can see the rest of the Watamu photos here

http://www.facebook.com/media/set/fbx/set=a.10150554707695444.652623.795715443&l=c21a70f257
Back at school now and this hectic term has started off to be just that.  I'm not sure how I'm going to manage to fit in some writing time, but will just have to give it a go.  I have two book projects on the go at the moment - How to say no to sex for the suddenly single, and Redesigning yourself for the multi-tasking generation.  And then of course Kerri and I stumbled upon this great idea for a novel when I wanted to advertise her skills on Facebook so that she can get a good and decent man.

I wish I had more time for my writing.  I need that cottage by the sea so I can watch the waves from my window while I write up a storm.  Sigh.  My book sales for March and April have been sensational, hope it keeps up.  Okay, enough about wonderful Watamu.  I might just jump in my car and head back out there when I should be WRITING!
Have a great week!
Cindy