Just when you thought things were slowing down...

That cottage by the sea and lawn bowls at the club every Wednesday afternoon sounds more and more tempting by the day.  But knowing me, I'll be bored after the first week.  I've come to realise that my life has to be non-stop action and out of control for me to be truely happy.
Our Grade 5 Exhibition was a huge success with students raising money for many causes.  When you see the Action they take, then you realise what a brilliant programme the PYP is.
This past weekend five staff took 27 little darlings down to Dar-es-Salaam for the big primary schools swimming gala and football tournament.  After a dubious start where the bus company delivered a bus that probably wouldn't have made it to the nearest fuel station in one piece (no seat belts and the seats were all loose and sliding everywhere) there was no way it would last the 10 hour bus trip to Dar.  But that was just typical of Tanzania.  And here I'd thought they'd think me anal retentive for phoning them twice a week for the last two months to confirm we'd be getting a new bus with seat belts!
The great hotel Siobhan and I had stayed in last year (Q Bar), granted it had been during the week, proved to be a bad recommendation for one of the parents.  Friday nights at the Q-Bar is obviously a no-no, with blaring loud music and prostitutes plying their trade in the rooms at night.  He said he couldn't sleep, and tried to think of a polite way to describe the sounds of sex penetrating through his walls.  I suggested 'Humpy Bumpy' and he fell in love with that, managing to include 'Humpy Bumpy' in every conversation from then on.  I'm not sure what his wife will think when he shares his new vocab with her when he gets back home. 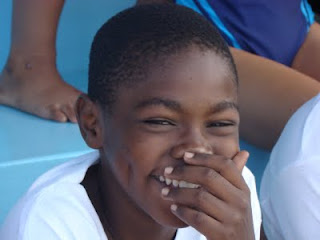 The kids did so well, the seniors coming second out of nine schools in the swimming, and the girls placing third in the football.  They definitely did us proud and it was great to reward them with a day of fun at the water park.
The trip back was long, with one kids dropping bad smells for twenty minutes solid, so that as the smell spread up the bus the kids would scream as it hit them like a Mexican wave.  They all blamed one little boy who eventually burst into tears as he was blameless.  No one likes being blamed for something they never did.  The real culprit was the last off the bus at the toilet stop in the bushes along the side of the road.  When we asked if he'd been the one farting, he just gave a sick smile and nodded his head sadly.  He didn't even try and deny it, but the rest of the bus never knew it was him.
Now admin for next year, reports, all little bits and pieces, just enough to keep me from what I really want to do - write.
The power problems with Tanesco are getting worse.  I've decided I need to buy a woman-friendly generator that starts with a push of a button or a key.  No more of this pull-rope one that hits me in the face every time I try it after the fundi removed the safety cover to make it work better!  Work better?  I laugh in his general direction!  The blasted thing, brand new out the box, has never worked since I bought it in November!
I'm hoping to get the first draft of How to Say No to Sex and other Survival Tips for the Suddenly Single finished before the holidays start, but I'm not sure if that is realistic of me.
My book sales, especially on Kindle, are going crazy, and I've sold over 1000 in May for the first time.  If you've got a Kindle, an iPad, a Sony E-reader or a Nook, you need to check out my books which are available on all those formats, as well as on Amazon.com as Paperbacks.
I'm thinking, maybe after this week things will start to slow down for the holidays...
Cheers,
Cindy
Posted by Cindy Vine at 4:15 PM

Hi Cindy, Did I tell you I bought your Kindle verson of The Case of Billy B. I have not started it yet - it is next on my reading list. I look forward to reading it. I'm glad it is selling well for you. Cheers, Di

Thanks Di! Hope you enjoy it!