The Crimson Key by Wes Dodd 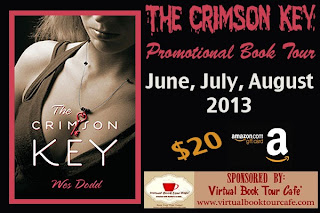 Wes Dodd was born in Lynchburg, Virginia in 1958, currently residing in Southside Virginia. He has two daughters and three grandchildren. Within the last couple years he has discovered a passion for creating and breathing life into great stories. He has published three novels: The Crimson Key, a mystery, The Secret Guardian, fantasy and Saving Faith, a romantic thriller.


The Crimson Key
Genre:Mystery
Publisher: Outskirt Press
Release Date: July 2012
Purchase http://www.outskirtspress.com/thecrimsonkey/
Book Description:
David Paige, a young detective from Charleston, S.C., is about to embark on an investigation of a lifetime—his own. After an unexpected tragedy shatters his perfect world, he discovers that his mother had been keeping a life-long secret from him, revealing that he is not who he believed he was. With no family member to turn to, David has to rely on his detective skills and a mysterious item left to him from his mother—a crimson-colored key.

The search for the truth takes David to New York City, where he runs head on into lies, deception and murder, all in an attempt to cover up a string of dreadful crimes. Then if this is not enough to deal with, he falls for the daughter of a prominent man, both sharing an undeniable attraction—which complicates his life even further.

It isn’t until a near-death experience, and help from his mother through several frightening nightmares, that the pieces of the puzzle finally begin to come together. The Crimson Key ultimately unveils many secrets, surprising many people including David—opening his eyes and heart as well.


a Rafflecopter giveaway
Posted by Cindy Vine at 8:27 PM