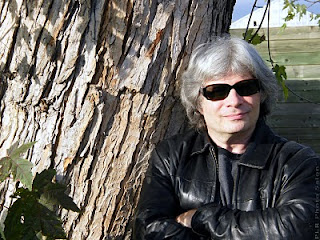 The next visitor to my blog, is David Fingerman.  I should have put his post up a couple of days ago, but as I had no power for a few days, I've got a bit behind with internet stuff.  I'll try and write about the last of my dental experiences tonight.  Anyway, here he is....drum roll here....David Fingerman!

I love the quiet of writing. I’m lucky. During the day I’m the only one here (except for the cat, and she’s quiet most of the time). Sometimes I’ll drop in a cd or occasionally even pull out the lps and listen to music. But often, the only sound is the gentle tapping of the keyboard as I do what I love to do – write. I dislike crowds. I feel the claustrophobia wrap itself around me just thinking about it. I left my civil service job over four years ago (holy crap! has it really been that long?) and I find getting out and mingling with strangers harder all the time. Hell, I’m just two steps from lining my walls with tin foil, wearing a metal colander, and moving my computer to under my desk. But I also want Edging Past Reality to be read. And that means getting out there and marketing. One of the ways I enjoy is to be a guest and post a blog on some kind soul's site (thank you, Cindy for allowing me to take up space on your site). Unlike many authors with something to say, I have no important message that I feel needs to be told, just a lot of fun stories that I think people would enjoy reading, especially if they liked “The Twilight Zone.”


Here's an excerpt from one of my short stories, "A Midnight Stroll."

Fog washed into the park like a tidal wave, which might be one of the reasons why I decided to take a walk. Bulbs of golden light seemed to float along the lined path through the thick air. Even up close it was hard to see the black poles that posted them in place. In fact, it was difficult to see more than three lights down as they disappeared into the mist.

Maybe it wasn't very bright of me to take a walk, what with all of the bodies that had been found in the park. But all of the bodies found had been young men, mostly hoodlums, all homeless. I was no spring chicken. In fact, I had just celebrated my seventy-second birthday. Well, celebrate isn't exactly correct. More aptly put, I turned seventy-two last Tuesday. At the assisted living home where I reside, they don't believe in fanfare for aging. It seems that most of the people there only exist, waiting for death. Not all of us, but then I'm considered one of the kids. I've still got some years left in me.

Also, there is my cane. The handle is made of lead and it's in the shape of an eagle's head. The beak curves down into a sharp hook. I'm no street-tough, but I still work out, and if threatened I'm sure that I could still swing a pretty mean stick.

I suppose that I should mention a third reason for getting out of my apartment. There has been a rash of deaths inside my building. The staff tried to tell us that it's just been a coincidence that six residents in the last month have passed. People there are old. It happens in clusters sometime. Not only did I know four of the six, but those four were in good health, and like myself, were the exceptions to the rule. They enjoyed their lives and wanted to hold off the grim reaper for as long as possible.

Then of course there was the ringer. The other night I just happened to open my door as they were rolling away victim number six. He was one that I didn't know. There wasn't any sheet covering the body, but he was in one of those heavy plastic body bags. To make it even worse, one of the orderlies who pushed the cart was yapping about how the last time he saw anything gutted like that was his last deer-hunting trip. He saw me and quickly shut his mouth, turning a shade of beet red.

Because of the obvious cover-up, I thought it might be an inside job, and I wanted to spend as little time inside as possible. These people were found in their rooms for God's sake. Where on earth can a person feel safe if not in their own home?

The damp, night air felt good against my skin, although I'd probably pay for it in the morning with my arthritis. But my legs needed the workout.

"Hey old man, pretty gutsy for you to be out on your own."

I froze. Too late to get off the path. I had been spotted, and I never heard a thing. I just had my hearing checked a couple of months ago, and the doctor said it was still good. I guess there are different definitions for good.

I slyly slid my hand down the cane. I figured if I spun around swinging, I could catch him off guard. I pivoted and made my move, swinging at what I hoped would be crotch level.

Two things caused my attempt to utterly fail. First, when I made my turn, my foot stepped off the path onto the damp grass. I slipped, and down I went. When I looked up, totally at the young man's mercy, I noticed that even had I not lost my balance, he was at least three feet away from where my cane would have whooshed through air.

Long, black, straight hair, parted in the middle, hung loosely over his shoulders. Even in the darkness I could make out his deep tan complexion. I guessed him to be Lakota Sioux, but I couldn't be sure. He tried to hold back his laughter as his black eyes looked down upon me. I'm sure that I must have looked to be quite a comical sight, and had my ankle not hurt so much, and this young man not about to kill me, I might have laughed with him.

I hoped that my face showed defiance, but I fear my mask was invisible, and I looked as scared as I felt.
Posted by Cindy Vine at 6:38 AM