The week that was

It’s difficult writing in retrospect, when there’s so much going on to write about at the moment. The last ten days or so have been like a mad crazy rush, an avalanche of things that you had to just run ahead of to avoid getting trapped under the weight of, so it’s good to take the time to sit now and reflect on the week that was. While I sit and listen to the birds singing and lions grumbling somewhere to my right. Yep, you heard right. Lions. It’s 6.45am and I’m in a safari lodge in Zambia.

It seems so long ago, but the madness started with a Mexican Party, a surprise one for Theron, our school’s PE teacher. Actually, maybe before that even, earlier in the day, very early, like 5.30am. I offered to second Maggie, the school’s drama teacher, who is one of these mad types who enjoy running. She was training for the Brisbane marathon which she’ll be running in on the 4th July. So, I drove slowly behind her while she jogged in the dark, ready to jump out and protect her virtue if she was attacked. Not sure how I would do that, but the thought was there. Maybe drive over the attacker or something. Maggie is so little, she’d be able to cower between the wheels and avoid getting crushed. But, I digress. When it got lighter, I’d drive ahead and wait for her with a bottle of water at the ready, reading a great book on writing by Anne Lamont that my friend Diane gave me for my birthday. Maggie powered up the steepest of hills, peed next to the side of the road and will win any marathon. She finished about 31km in 2 hours and 50 minutes, a lot of that uphill. Definitely, a super woman, but not somebody I’d like to emulate. Staying in the car reading was more my kind of thing. 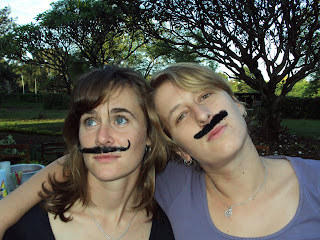 The Mexican Party was a riot, with everybody donning moustaches, drinking heaps of punch and feasting on guacamole and tortilla chips and the tenderest of tender beef fillet expertly barbecued on hot coals. There was that donkey paper mache thing, I know the name for it but it’s completely escaped my mind, which we hammered the shit out of blind-folded to try and knock the candy out. David, the art teacher, had done such a wonderful job making it, it was hard to smash. But Maggie went to her house and fetched a knobkierrie after we broke a broom handle trying to smash it, and that worked.

Sunday afternoon was a superb spread at the Bryce-Benetts in Marangu, and all these events were interspersed with me frantically working on the Yearbook. We got home to no power, which only came on again the Monday as we were leaving for school. Power on Monday and then no power again on Tuesday. When we left for school Wednesday morning, it still hadn’t come back on. I tried to phone TANESCO to find out what the situation was with the power, as we were the only house powerless in the neighbourhood. The twinkling lights of our neighbours made me roar with jealousy, rather like the lion I just heard this second. TANESCO were singularly unhelpful. The first five times I phoned, some little man said something in Swahili and put down the phone. The sixth time, he called someone who could speak a little English. “Can you see anything funny happening on your pole?” The man asked me.

“It’s dark, I can’t even see the pole,” was my somewhat short response.

As I just know the name of my street and not the plot number, I couldn’t direct them to our house to sort out the problem. “Just drive along until you see a house in darkness with a woman sitting inside with flames coming out of her ears as she’s so mad because she has no power to charge the laptop to finish the damn yearbook!” They never found our house. Either I wasn’t mad enough, or they didn’t bother to look. So we just went to bed. What else can you do when it’s so dark? 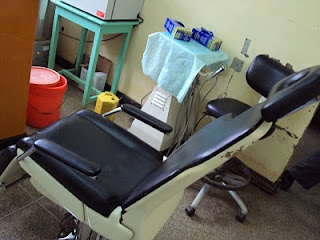 Tuesday morning I went for round three with my dentist friend at Mawenzi Hospital. This was supposed to be the last root canal treatment and then the fitting of the crown. I headed up to his surgery at the hospital with much trepidation, remembering the careless way he’d injected me so that half my throat seemed to swell shut with numbness and the bleach. How could I ever forget the bleach mouth wash? I just smell that stuff now and I want to gag. However, no injection, no bleach. He must have read my last blog! He drilled and pasted stuff on the tooth for an hour and a half, and managed to get quite a bit on my tongue so that it felt as if it was covered with hard pimples. The whole procedure – lancing the abscess, removing botched up Chinese root canal, doing a new root canal, and then a crown, cost me a grand total of $65. I don’t think I can get that much cheaper elsewhere. After scraping off the hard lumps on my tongue, I could run my tongue over my tooth and it seems okay. I’m not sure how long this crown will last, as one week later and already half of it seems to have worn away.

The power problem was finally fixed sometime Wednesday by the school’s handyman, who said he’d done a temporary repair job. He saw carbon on the pole, so he thinks there must be loose wires catching alight, so he joined them together with some tape. Charming. I hope TANESCO come and fix it properly, because that’s a helluva lot of voltage to be held together with some tape.

The yearbook was finally completed Thursday morning and I could start the big job of burning the pdf files onto cds. Making the final pdf was another headache, as I had to merge in other pdf files and let’s just say, I am now officially a pdf expert. I can do all kinds of things with a pdf. However, pdf files would not help me plan my big road trip, which I hadn’t yet had a chance to think about.

Thursday night and saying goodbye to a dear friend Diane Bowe who unfortunately heads back to the US with her family. They were only here a year, she helped Americanize The Case of Billy B, took many of the photos for the yearbook, accompanied us on our school field trips, she’ll be sadly missed.

Friday, like the rest of the week, passed in a blur. A goodbye assembly, class party, more yearbook cd copying, then the staff barbecue, and then it was time to finally catch my breath and think about the 4500km I’d be embarking on the next day. We packed our cases, made snacks for the road, headed off to school Saturday morning for a staff breakfast, couple of meetings and finally at 11.45 we hit the road. Unfortunately, not much planning, but Siobhan had the guidebook and read aloud about the places we’d be stopping off at, so that we had an idea of where we could stay.

Today is day five of our road trip. We should be heading down to Livingstone in Zambia, we’re staying at a Protea Safari Lodge, the only guests at the hotel, and they have 40 chalets! So, should head down for breakfast, then check out those growling lions, pack our car and be on our way. I’ll write more about our road trip later. I’ve been keeping copious notes and Siobhan’s been taking excellent photos along the way. Suffice to say, I’m thinking of writing a book on our trip and calling it Mountain to Mountain. Kilimanjaro to Table Mountain, get it? Everything’s been going fine, people are so friendly, and we’re having a blast. Hopefully, I’ll find the hotel’s Wireless Hotspot so that I can send this.