Am Interview with Martin Sharlow

Good day!
I'd like to welcome Martin Sharlow to my blog.  Martin is the author of 'Shades of Blood.'  Martin has kindly agreed to answer some very taxing questions about his book and writing in general.

Blurb
"Melissa, Michael and Debbie's evening of celebration and victory ends with a chilling realization: something out there is still taking people off of the quiet streets of Hazel Dell. While searching for answers, Melissa's other friend, Sarah, is dragged into the mess with them. and soon Melissa must divide her time between solving the mystery of the disappearances, figuring out what it means to have a vampire boyfriend, and finding a way to protect both of her friends from the new and unknown dangers of Portland's nightlife. But even if Melissa can muster the strength and resolve to try, can she really protect the people she cares about from vampires and the monsters that still lurk in Hazel Dell Park, when even Michael is keeping dangerous secrets from her?What do Melissa's dreams mean? Who are the robed men that slink through the shadows of Hazel Dell? And just what isn't Michael telling her about vampire blood?Melissa must discover the answers to all of these questions herself, or even her vampire protector might not be able to save her and her friends from the dangers that stalk through the shadows of Hazel Dell.Shades of Blood is book two of Shades of Twilight. " 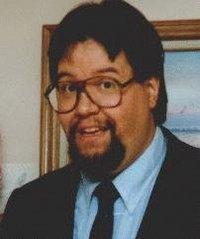 An Interview with Martin Sharlow
What inspired you to write this book?
The readers of the first book. I kind of left the first one semi open at the ending. My original thoughts were that this would be a multi-book series with an emphasis on developing the main character's--Melissa's--personality as each book progressed. I had originally thought about having this girl fully developed, but the idea of watching her develop and mature into a woman seemed more interesting to me than just having her pre-developed at the beginning the story.

Have you always been interested in vampires or are you just following
a current trend?
Interesting question. As to being interested in vampires, yes I have always had an interest in them. When I was five and six, my friends and I would play monster games where we would become a monster of our choice. I always chose the vampire for my monster. He just seemed so much cooler with all his different magical powers than say someone like the Frankenstein monster which was just super strong. As to my writing paranormal romances, I had no idea that the genre even existed before Twilight came out. To be honest, the first paranormal romance I ever read was written by Amanda Hocking.

What do you believe is the best thing about your book?
Do these questions actually get easier sometime soon, I hope? This is a hard one. When I started to write this series, the first thing I wanted to do with it before I even made the main character and decided how she would be, was to put it in the real world. I mean, I know a lot of books put their characters in a parallel universe that seems like a real one. It just never seemed like it was to me. So my goal was to give them the awareness that someone like you and me would have in our daily lives. For us there is no such thing as vampires. At least not beyond fantasy and fiction. I wanted that for Melissa as well. But I wanted her to be a fan of paranormal romances as well, so she would have some niche knowledge to help her along and hopefully connect with readers as well.

How did you get started as a writer?
I have a creative side to me that just needs to create a times. I've done that over the years in different ways. Right now, I'm putting all of that need into writing. I wrote a couple of short stories in the past, just for fun. Nothing serious. But a couple of summers ago, I actually started to write to make me feel better. I was in a dark point in my life, and writing seemed to give me escape and self-worth that I needed at the time. Writing helped me to get my life back on track.

Do you self-publish? What are your views on self-publishing?
Yes, I self publish. I've never been one of those people that just do everything normal. Usually I almost always had off on my own path. I'm kind of contrary. When I was younger, I learned the martial arts not by going the traditional route such as signing up for a club or class. I learned my art from people I had met over my life, as well as developing my own style. I've done that pretty much in everything I do in my life. As to self-publishing views, I think self-publishing is the wave the future. Traditional publishing is going to find it hard to compete with self-publishing in the future. More and more big names are going to realize how much more money and control they can have over their work if they just self publish. I don't see how the big publishers can compete with that. Unless of course they cheat and find a way to shut the independents down.

What advice would you give newbie writers just starting out?
Well, I think all the standard advice works here for newbie writers. The biggest thing you have to do, is believe in yourself and not listen to all the bad advice out there that's telling you to go the traditional route. Thing of it this way. Publishers want proven track records. If your work is good, you're going to sell books. Publishers are in this business to make money by selling books. Having several books do well without money backing of traditional publishers, tells those publishers that your a good investment. If your books won't do well in self-publishing these days, there won't do any better traditionally published. Self-publishing is no longer the kiss of death that it was years ago. It's faster and more reliable than querying agents and publishers, and at the same time you're making fans as well as cash on the side. It's great way to start.

When you write a book, do you start with a structured plan or just let
the words flow and let the story lead you? Basically, describe your
writing process.
I've tried structure plans as well as well as just letting the story flow. For me, I like to let it flow where it will. It's part of my creative side. When I was younger, I used to play role-playing games. Pen and paper types, I mean. I always had some story line we would be following. It was well structured and everything. But what set my adventures apart from everyone else's, was that I ad-libbed a lot into the story. I was constantly coming up with things on the spur of the moment to add to the adventure as it played out. I find that happening with my writing these days as well. Usually, I have an idea, and I build a story around it. Also just a skeleton, the people, the idea, and how should end. The rest I write on the spur the moment as I write it all down.

What marketing advice would you give new authors?
The first thing I would do is get on Amazons Kindle. Amazon has the largest market share in the world for self-publishing. You need to be on that, that should be your main goal. Amazon all by itself can support you. The other ones are good too, but unless you get lucky and find a niche audience there, your best chance is Amazon.
After that, I would say make sure your cover is eye-catching and awesome. It has to be directed at your audience. Writing paranormal romance novels, you don't want to say make a cover that would appeal to the readers of 007. You need something that catches the eyes of paranormal romance readers.
The next thing you need is an awesome blurb that grabs the reader's interest after your cover did its job. After that you need to have written an interesting book. You could've written the best book in the whole world, but that isn't going to do you any good if no one ever stops to look at it. That's the job of your cover. It catches their attention, while you're blurb hooks them into actually opening your book. Your writing in the end is what finishes the deal. Beyond that a lot of the rest of it is just luck. John Locke said that he spent tens of thousands of dollars advertising his books and failing miserably at first. So throwing money at the situation isn't the answer. Appearing on blogs help, though, and in fact I want to thank you for allowing me to visit here on your blog. I appreciate it, and I hope your readers enjoy my few comments here.

Thanks so much Martin, for taking the time to stop by and share your secrets with us!  Best of luck with 'Shades of Blood." 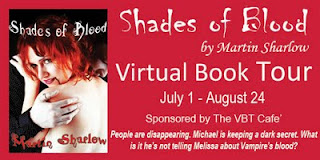