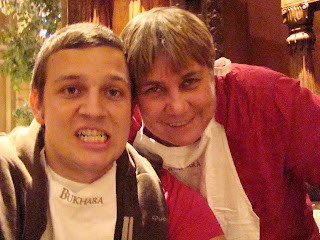 It didn’t seem possible. There were just so many hurdles we had to jump. But tonight, as I relax in our new house, I know that all things are possible.
Our last few days in Cape Town flew by in a rush, frantic last minute goodbyes, creative packing. In the end we ran out of time and couldn’t see friends and family just one more time. We tried to avoid shopping as much as we usually do; experience has taught us that trying to stuff our purchased treasures in our limited luggage causes more stress than the treasures are actually worth. However, Siobhan still managed to go crazy in the clothing stores. This holiday will be remembered for the time spent with old friends and relatives not seen for a few years, babysitting the nephews, researching the family history, seeing some good movies, eating out a lot at great restaurants but most of all - spending time with Tony before he started his last 10 week prac block at a 5 star hotel near where he stays. It’s the same with Kerri now. You have to make the most of the time they spend with you as they pursue their own lives. I guess that’s what happens when your kids leave home. At least I still have two more years with Siobhan before she leaves the nest.

Our flight home wouldn’t have been normal if we didn’t have some drama. We arrived at the airport in time for our 6.15am flight last Wednesday, only to find out that the travel agent had cocked up Siobhan’s flight yet again. On the way here he’d accidentally booked Siobhan’s Joburg to Cape Town flight ten days later than mine. Going back, he had her on an earlier flight than mine which had already closed! The last time we had to buy her a new ticket on my flight; this time they said my flight was full. They could either get her on a business class flight in an hour’s time (which I’d have to pay for) or another flight in an hour and a half-s time. Obviously I’d have to pay for that as well. Siobhan, always a great actress, managed to look tearful and the supervisor at the check-in instructed the attendant there to just issue Siobhan with a boarding pass. We managed to get her on the full flight without paying in, and all the drama made them rush our luggage through and not notice that we were actually 20kg overweight! The rest of the flight was uneventful. They didn’t even manage to lose our luggage which was quite a miracle for us. Unfortunately, the driver didn’t turn up to fetch us from the airport. We heard the next day he arrived an hour later and by then we’d already left by taxi. The excuse given was the very stale, “This is Africa.” It really makes me mad when people say that. This isn’t Africa. I’ve lived in five different African countries. This is Tanzania. TIT. Of course, there was no power when we arrived back at night. It came back 26 hours later!

They had 5 weeks to paint the new house, but were still busy so we couldn’t start our move. It seemed like we’d never get to start the move across. Thursday they told us they’d finish Friday; Friday they said it would be Saturday; and this carried on until they eventually finished Monday night. Over the weekend we started to move in anyway, living between the two houses in utter chaos. It didn’t seem like we’d ever be able to complete the move before the new teachers arrive at the end of the week. But we have, we did; and just a few more trips from the other house and we’re done.
We’ve been promised that Tanzania’s power woes are set to get worse until 2013. Charming. So I decided to buy a generator that works this time. The last one still sits unused in the garage of the old house. Manufacturing fault, it never worked, and the fundi who tried to fix it removed the safety shield so that when Siobhan and I tried to pull the whipcord - I got whipped in the face and Siobhan got whipped across her back. Not very pretty. We found one in town that starts with a key and I bought it today. No more pulling of whipcords. But Murphy’s Law, we’ve had power all day and all night so far. It only went out between 6-7pm and we didn’t bother to start the new generator. When the power woes resume, we are ready.

With all that’s been going on there’s been no time to write. Not just no time, but too many distractions to stop me from getting into my special writing zone. Hopefully, the end of this week will be the end of the distractions. I can’t wait to start writing again. I’m working on two projects at the moment. Redesigning Yourself for the Multi-tasking Generation with Jeremy Sherr and Meet U @ 8, a novel inspired by my eldest daughter, Kerri.
My book sales this month have gone from strength to strength - mind-blowingly so. How to Say No to Sex and other Survival Tips for the Suddenly Single is now available on Kindle, iPad, Nook and Sony with the paperback edition available soon. If you know someone who is struggling to cope after a break-up, then this book will make an ideal gift for them. I received a great comment from a book club. “Cindy Vine is a phenomenal author with the ability to pull you right into her stories. She is destined to go far in the literary field!” — Greatmindsthinkaloud Bookclub on Jul 23, 2011
The news of late us been dominated by two awful events. The attacks in Norway, and the death of Amy Winehouse. I’d like to offer my condolences to all who lost loved ones in Norway. It’s so sad when someone’s political beliefs warp their sense of what is right and wrong. Amy Winehouse’s death is tragic. We all saw it coming but couldn’t stop it. Like bystanders on a platform at the station watching a train power headlong into a girl standing transfixed on the tracks. So young, only 27, the same age as some other famous musicians who died at that age. I can only imagine how devastated her family and close friends must be feeling. So talented, so full of love, such a waste. RIP Amy Winehouse.

Please for Christ sake please help me
I need your help and support to help PAY MY Tuition Fees. I need your only 3 to 5 minutes approximately

NOTE: Only ONE click is needed.
I will be grateful to you.
May God Bless You.