My life is a B-Grade movie 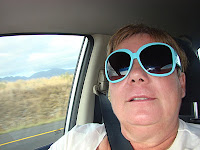 Have you ever watched a movie and thought, "What utter rubbish!  That kind of thing doesn't happen in real life!  No way Jose, that's not real!"  Welcome to my life.  Even I often believe that my life can't be real.  That this is some kind of a weird dream I am living.  One day I will wake up and sigh and say, "Thank God it was only a dream!"  I pray that day comes soon.
There are those people who go through their schooling knowing what career path they are going to choose.  They succeed at everything education, relationships, parenting, career.  They have a gorgeous house in the suburbs, go on great family holidays every year.  They are always happy and smiling, a bit like in those toothpaste commercials.  I am not one of those people.
Whether my life was pre-destined to be as chaotic as an untweezed eyebrow or whether I subconciously create the little dramas and adventures that populate it I'll never know.  I just know that some of the things that happen in my life are as unbelievable as a plot of a B-Grade movie.
It always amuses me when people say, "You need to put that in a book."  The problem is that I don't write fantasy or science fiction.  I write realistic fiction.  If I write about some of the stuff that happens to me, my readers will say "far-fetched, can't be true, improbable."
For example, take the events of the past week.
When my mother said goodbye to us at the airport after our holiday in Cape Town, I told her to get her cough seen to.  The next night she was rushed to hospital unable to breathe after a coughing fit.  Diagnosis: Pneumonia.  Now remember this is summer in South Africa.  While much of the world is freezing, it's the hottest time of the year in Cape Town.  How do you get pneumonia in summer?  My mother was released from hospital the Monday, re-admitted the Thursday and put on antibiotics intravenously.  Friday night her blood pressure starts dropping dangerously low.  Friday night on the other side of the world on his way to work at the Ritz in Naples, Florida, my son gets knocked off his bicycle by a woman failing to stop at a stop street.
We now have two dramas, two plot-lines in this B-Grade movie.  Remember, I am living in Tanzania.  My mother and my son, both in hospital.  Only one of them on the same continent as I.
My son luckily only has torn ligaments in his knee, a sore head and a bone cyst on his elbow.  He will live although his bicycle is a total write off.  The woman pays his medical expenses and buys him a new bicycle.  Despite advice to the contrary, my son wants no more than this.  He figures it's immoral to make someone pay for their mistake.
Already some of you are thinking, two dramas on one night, how improbable.  But I swear to God it's true,
My mother makes slow progress and is eventually discharged the Tuesday afternoon.  On Wednesday she decides, despite being told to stay in bed and have complete bed rest, to amble over to my brother's house.  He happens to live next door.  My brother has a very big dog.  It's paws are the size of side plates and it slobbers everywhere.  I think it's a bull mastiff.  The dog was so happy to see my mother, it jumped on her knocking her flying.
Back in hospital.  Cracked vertebrae, effectively a broken back.  Remember, she hasn't yet fully recovered from the pneumonia.
Doesn't sound real, does it?
But it gets more bizarre.  My stepdad has had several back ops.  For the last couple of months he's been getting a lot of pain from a pinched nerve.  He's scheduled to have an operation on his back on Tuesday to fix the pinched nerve.  The same day my mother will be having an operation to repair her broken vertebrae.  How romantic.  A hospital honeymoon both flat on their backs, sharing a ward together.
Seriously.  I mean, seriously.  Does anybody's life get more B-grade than this?
Posted by Cindy Vine at 11:27 AM