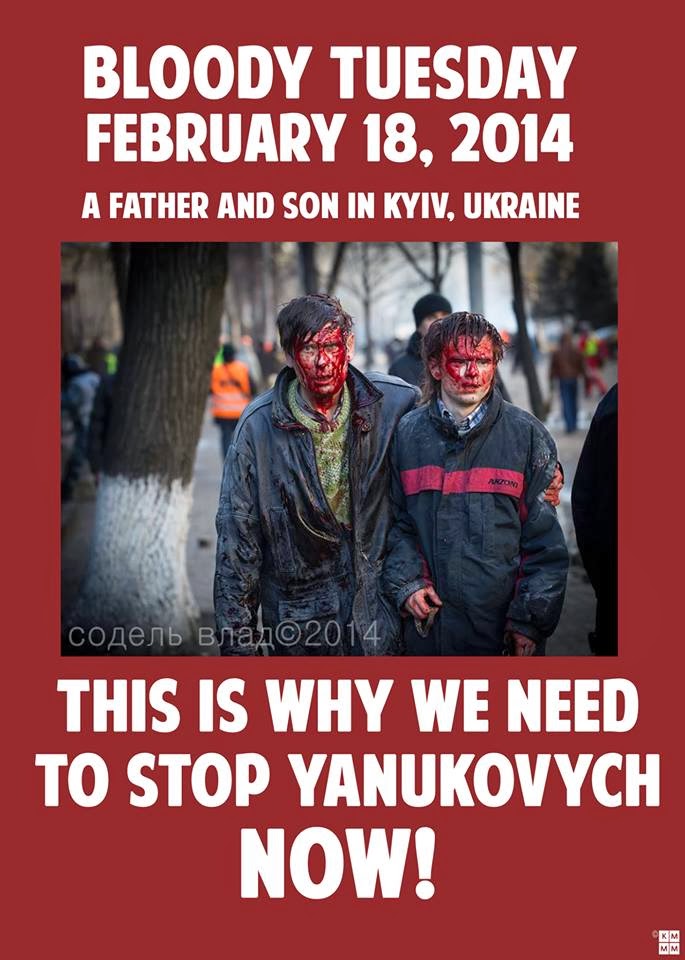 Why is this happening?
When I arrived here in September 2013, I thought Ukraine was a peaceful country.  I knew that it was looking to move closer to the EU and I thought it would be a perfect gateway for me to explore Europe.
All that changed on the 21st November 2013 when President Viktor Yanukovych decided not to sign a Free Trade Agreement with the European Union.  The people were upset, they protested and gathered in Independence Square (Maidan) to hold rallies to voice their protests.  Yanukovych, who hit the spotlight in the peaceful Orange Revolution a few years back in 2004 when he was accused of electoral fraud and rigging an election, wanted to move closer to Russia's welcoming arms.  The people of Ukraine, however, find Russia's arms more strangling than welcoming and so they got upset.  The protests and rallies were initially peaceful until riot police called Berkut, tried to forcefully remove the protesters on the 30th November.  The police presence increased, more and more protesters arrived from all over Ukraine and set up camp in Euromaidan, turning it into a well-equipped tented village.  The government was unimpressed.  Every weekend, thousands, sometimes hundreds of thousands, of people attended Euromaidan rallies led by leaders of the opposition parties.  Into this mix arrived bands of government-funded thugs called titushki, many of whom spoke with Russian accents. 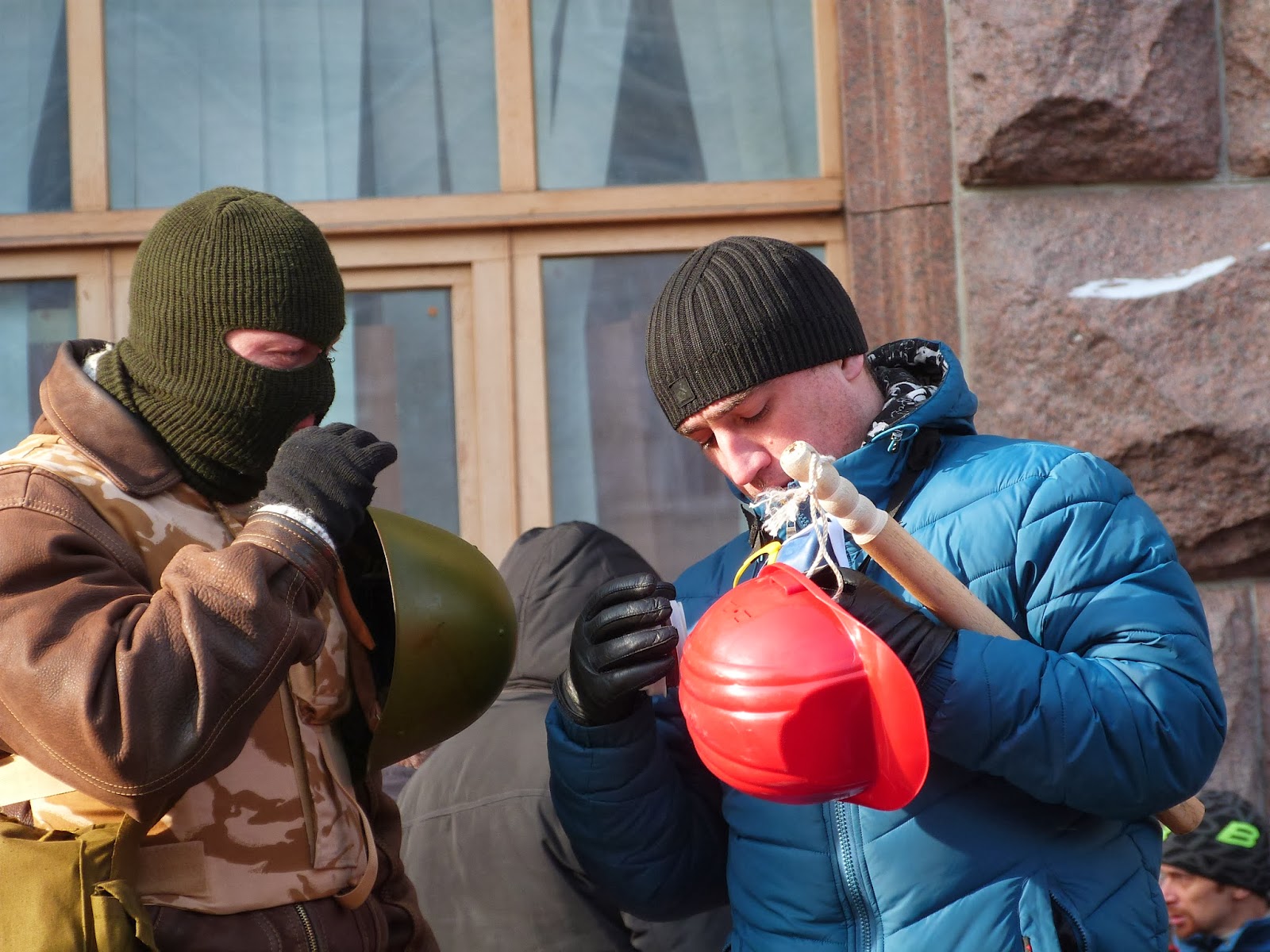 (Interestingly although many Ukrainians speak Russian, the accent is different to when Russians speak Russian and they can identify Russians from the accent.)  These titushki dress like the protesters and mingle with them and wreak havoc amongst them.  They are responsible for kidnapping various high profile protesters, some of whom made it back alive after being left for dead in the forests, looting, beating up innocent bystanders, egging the US Embassy, burning cars of protesters and initiating violence between police and protesters.  They provoke the police deliberately so that the police retaliate forcefully against the protesters causing violence and intensifying the unrest.  Of course, throughout these past few months journalists have also been targeted by police and titushki, some beaten badly, some even killed.  Just last night titushki pulled a taxi off the road, beat up the occupants of the taxi including the driver, and shot and killed a journalist who was in the car. 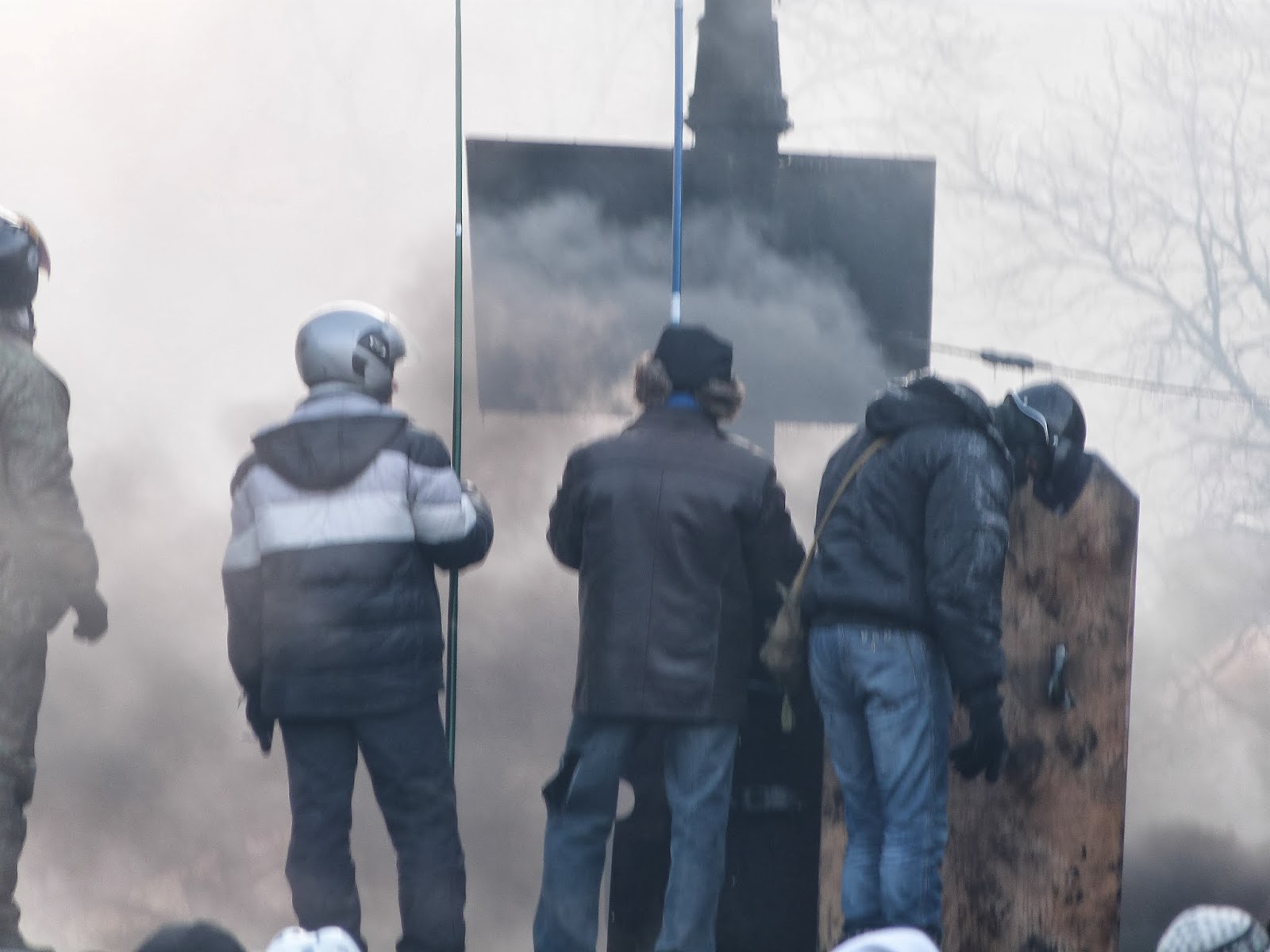 Police have been heavy-handed, using live ammunition and not just rubber bullets and tear gas.  Protesters have an armed self-defence unit who are radical and who fight back to protect the people at Maidan.  Not many have modern weapons, most resort to more medieval measures.  They built a giant catapult, dug up paving stones from the roads to use as missiles, armed themselves with sticks, baseball bats and shovels, collected tyres to burn, created barricades and built up a stock of bottles to make molotov cocktails.  Many would say they have no chance against the well-equipped Berkut, but they have the desire to change the Ukraine and the conviction of their beliefs to give them strength to withstand the dark forces.
Police have captured and tortured protesters, making them strip down and parade naked in sub-zero temperatures.  The government brought in Draconian anti-protest laws.  The people got more angry.  This was not a healthy situation. 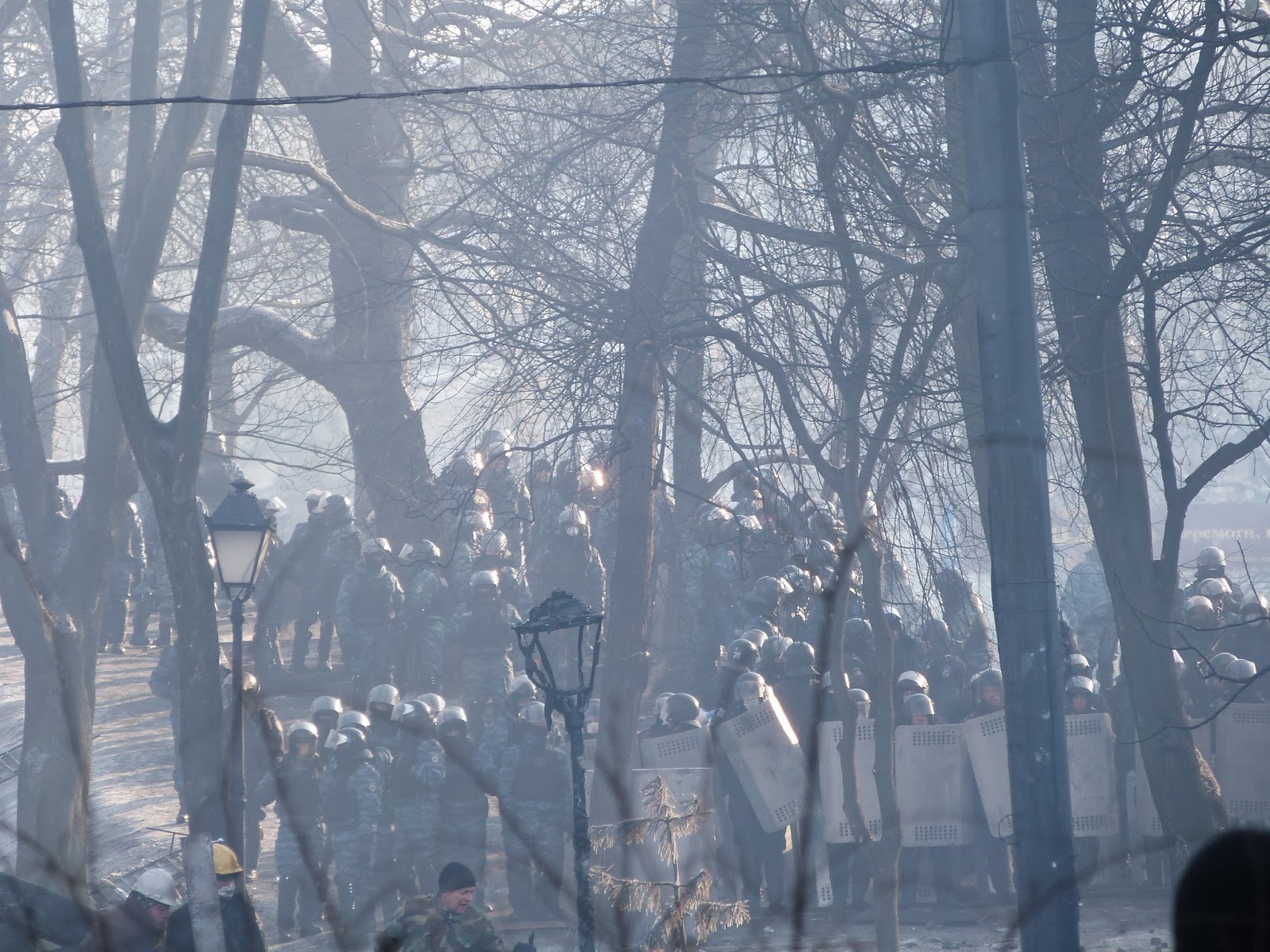 The opposition leaders called for the corrupt government to stand down, for there to be immediate elections.  The government signed a multi-billion dollar bailout deal with Mother Russia, sealing Ukraine's fate.
An amnesty was achieved when the opposition agreed to vacate government buildings they had taken over in exchange for all protesters in prison being set free.  The minute the government buildings were vacated and some barricades were being dismantled, the government made its next move and flooded the streets with thousands of Berkut armed and kitted out in their riot gear.  Their mission was to clear the Maidan of protesters.  20 000 protesters held firm behind the smoky remains of blazing fires that kept the Berkut at bay throughout the night.  25 dead so far, over a thousand injured, the stand-off continues. 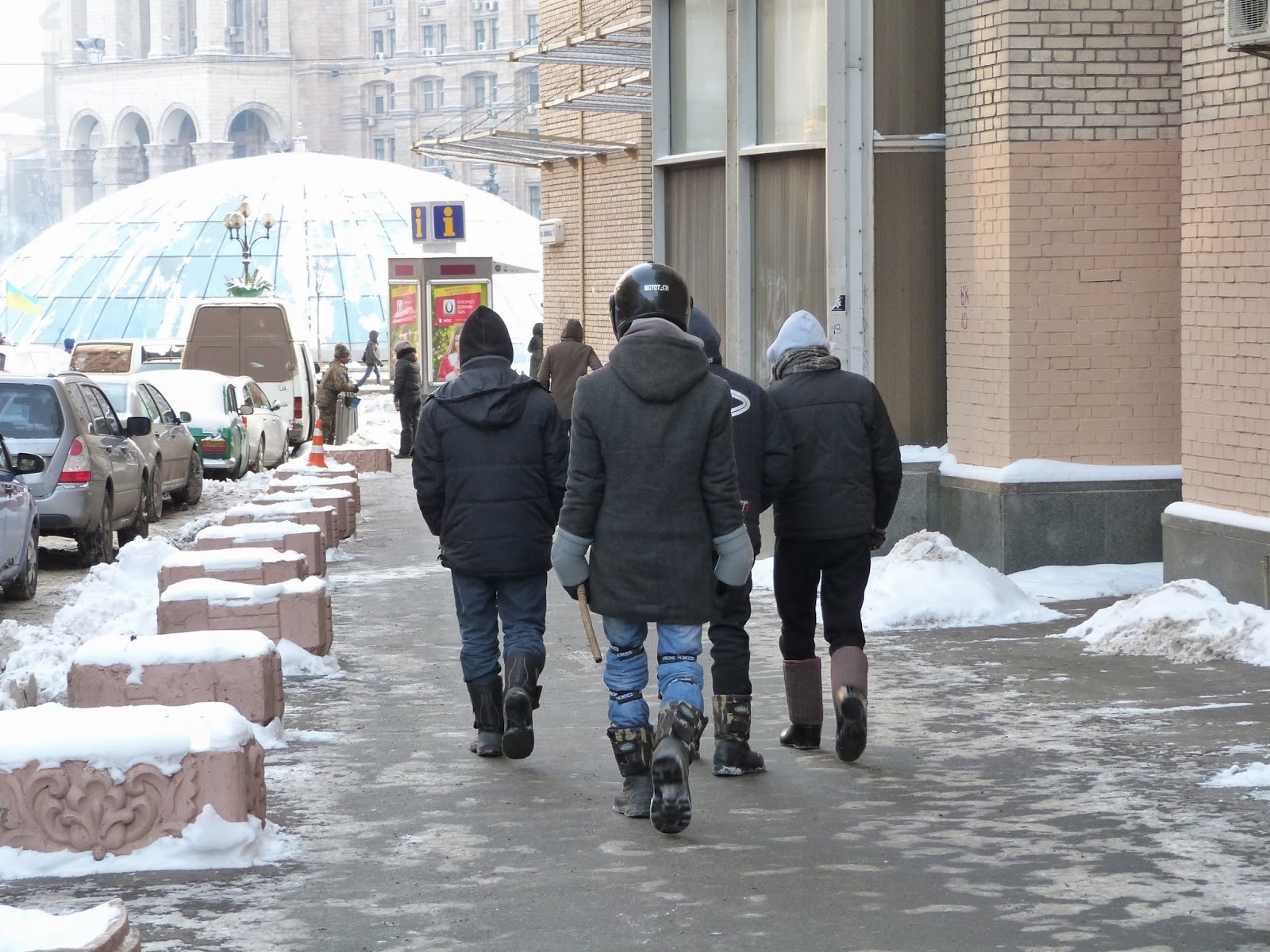 Big Brother is watching
The last time Ukrainians made a stand and got rid of the corrupt Viktor Yanukovych they managed to bring in a West-friendly government.  The constitution changed, it was a real democracy.  At the time that scared the living daylights out of Putin.  He believed and probably still believes, that Ukraine is still a part of Russia, just another state.  Therefore he watches Ukraine's every move, threatening economic sanctions if they don't succumb and bow down to his will.  Putin does not want Ukraine to have anything to do with the EU, he wants them firmly ensconced in Russia.  He dangles economic aid like a carrot.  You have to remember that Kyiv is the cradle of Russian civilisation.  It used to be the capital city many years ago.  I have to wonder though, if the people protested against Yanukovych in 2004 and got rid of him then because of his corruption and greed, why did they vote him back into power in 2010?  It makes no sense to me.
What is happening in Kyiv is spreading all over the Ukraine.  Putin must be angry with Yanukovych now for not having stamped this rebellion out at the onset.  One wonders when Big Brother will come to his rescue.  Will there be more Human Rights abuse in the Ukraine? 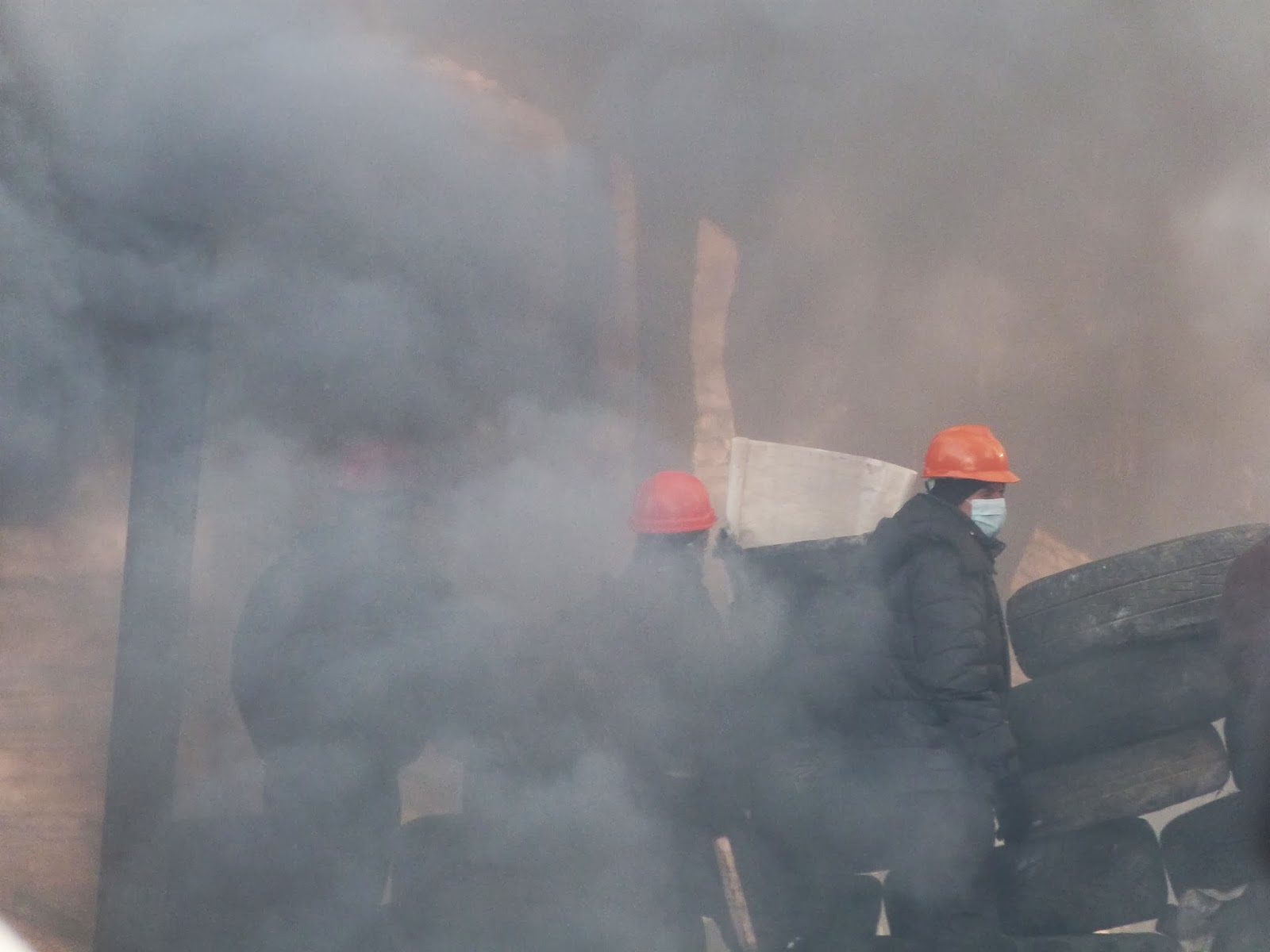 Where to go from here?
Excuse the pun but that is the burning question.  One has the feeling that there can be no winners here.  It is a lose-lose situation.
The opposition doesn't have enough control over the more radical elements of the protesters to make them toe the line.  The people of Ukraine are united in their dislike of the government but not united in whom they support in the opposition.  The potential withdrawal of financial aid from Russia if Yanukovych doesn't do what they demand and the West's humming and hahing of how best to help Ukraine has left the president with little choice.
Cindy Vine is a teacher and author currently living in Kyiv.  She is the author of Hush Baby, The Colorful Art of Pain, CU@8 and Defective.  All her books are available on Amazon as kindle books and paperbacks. 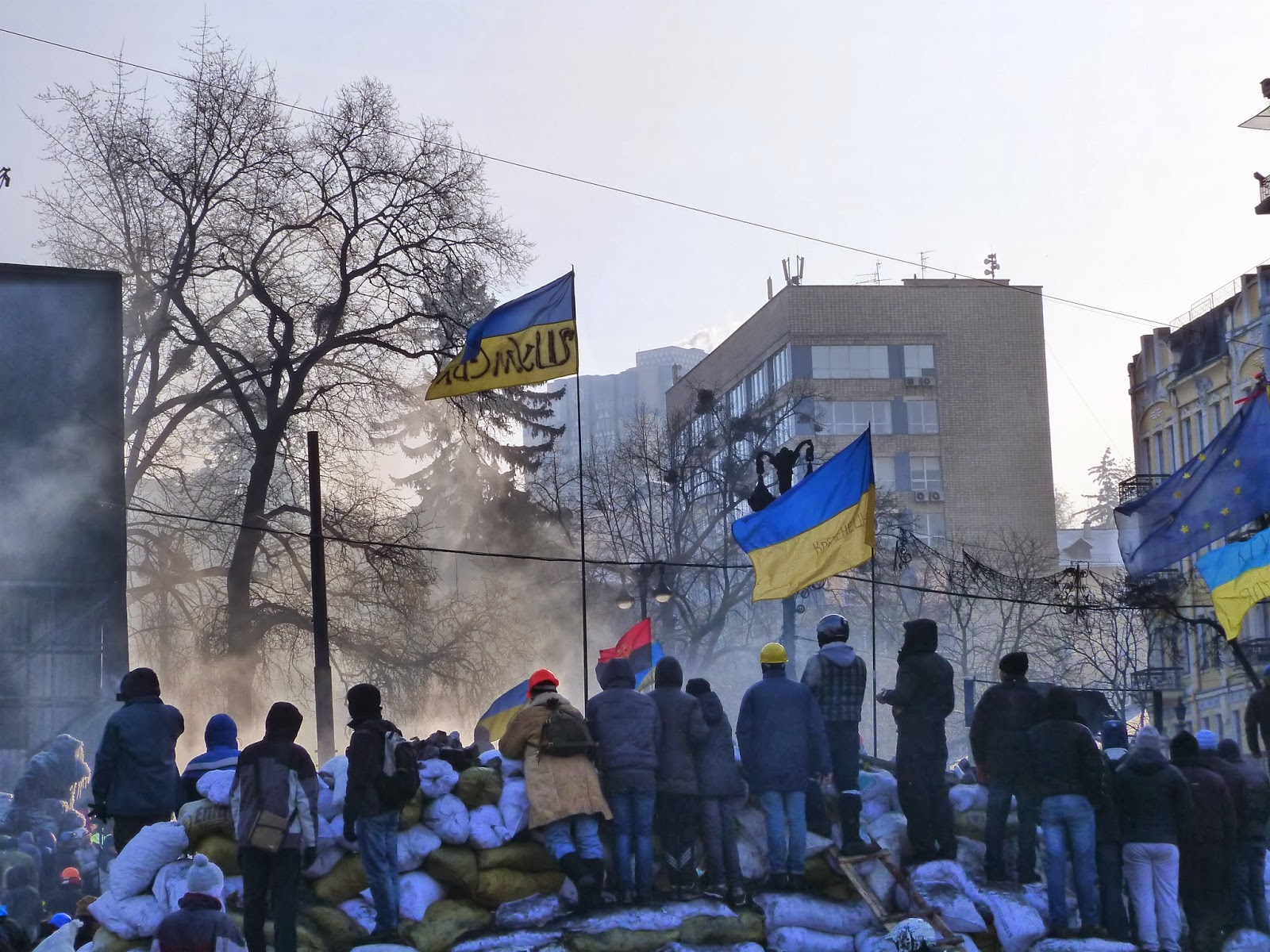 Fascinating post, Cindy, but really scary. Take care of yourself. Don't get caught in their fight.

Thank you Cindy for the post. We watch in horror as we see the peace loving people of Ukraine again become the persecuted. These people have endured, have peacefully protested for months, and now they are being punished. Human rights violations galore! I am so sorry you are there watching this spectacle, it must leave you afraid. I am very afraid that our ally country, who stood side by side with American soldiers, are now being taken over by Russian influence again. If Ukraine loses their freedom - the world loses as well. It's about time we support our ally instead of supporting enemies. Thank you Cindy for this post, your observation, and your compassion. Best wishes.