As part of her Virtual Book Tour, Cissy Hunt, author of A Rose Blooms among the Thorns, is making a guest appearance on my blog.  She's written a great post on Domestic Abuse, which is something very close to my heart.  I've done quite a bit of research on the subject, and most of my books do have some element of abuse in them.  So, without any further ado.....here's Cissy!

ABOUT ME (Cissy's bio)
I was born and grew up in Louisiana. I worked in the nursing field as a licensed practical nurse for almost 30 years. My husband and I now live in the beautiful Ozark Mountains with our two small dogs and two cats, where we love to night fish in one of the beautiful lakes here and work in our yard.

I have been an ordained minister since August of 2007. I am called to minister to hurting women who carry the emotional scars of domestic abuse.

For as long as I can remember I have always loved to write. When I couldn't express myself verbally, one only had to hand me a pen and paper and out would flow my words on to the paper. 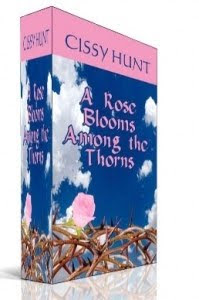 My book, A Rose Blooms Among the Thorns, is the story of a woman's journey from domestic abuse, through healing, to forgiveness.

ABOUT A ROSE BLOOMS AMONG THE THORNS

My book, A Rose Blooms Among the Thorns, is about a woman’s journey from domestic abuse through healing to forgiveness. LaRae Jones, the main character is finally granted a divorce from her abusive husband, but this means nothing to James, her now ex-husband. He stalks her across the country, even goes so far as to hiring a private investigator to find her for him. LaRae stays on the run from her now ex-husband while at the same time trying to work.

My book, A Rose Blooms Among the Thorns, is a fictional story about a woman’s journey from domestic abuse through healing to forgiveness. This book covers a subject matter that is very close to my heart. the subject matter it covers is domestic violence.

Domestic violence and abuse can happen to anyone, yet the problem is often overlooked, excused, or denied. This is especially true when the abuse is psychological, rather than physical. Emotional abuse is often minimized, yet it can leave deep and lasting scars. Most cases of domestic violence are never reported to the police.

Domestic abuse, also known as spousal abuse, occurs when one person in an intimate relationship or marriage tries to dominate and control the other person. Domestic abuse that includes physical violence is called domestic violence.

Domestic violence and abuse are used for one purpose and one purpose only: to gain and maintain total control over you. An abuser doesn’t “play fair.” Abusers use fear, guilt, shame, and intimidation to wear you down and keep you under his or her thumb. Your abuser may also threaten you, hurt you, or hurt those around you.

Domestic violence and abuse does not discriminate. It happens among heterosexual couples and in same-sex partnerships. It occurs within all age ranges, ethnic backgrounds, and economic levels. And while women are more commonly victimized, men are also abused--especially verbally and emotionally. The bottom line is that abusive behavior is never acceptable, whether it’s coming from a man, a woman, a teenager, or an older adult. You deserve to feel valued, respected, and safe.

Domestic abuse often escalates from threats and verbal abuse to violence. And while physical injury may be the most obvious danger, the emotional and psychological consequences of domestic abuse are also severe. Emotionally abusive relationships can destroy your self-worth, lead to anxiety and depression, and make you feel helpless and alone. No one should have to endure this kind of pain--and your first step to breaking free is recognizing that your situation is abusive. Once you acknowledge the reality of the abusive situation, then you can get the help you need.

There are many signs of an abusive relationship. The most telling sign is fear of your partner. If you feel like you have to walk on eggshells around your partner--constantly watching what you say and do in order to avoid a blow-up--chances are your relationship is unhealthy and abusive. Other signs that you may be in an abusive relationship include a partner who belittles you or tries to control you, and feelings of self-loathing, helplessness, and desperation.

When people think of domestic abuse, they often picture battered women who have been physically assaulted. But not all abusive relationships involve violence. Just because you’re not battered and bruised doesn’t mean you’re not being abused. Many men and women suffer from emotional abuse, which is no less destructive. Unfortunately, emotional abuse is often minimized or overlooked--even by the person being abused.

Emotional abuse includes verbal abuse such as yelling, name-calling, blaming, and shaming. Isolation, intimidation, and controlling behavior also fall under emotional abuse. Additionally, abusers who use emotional or psychological abuse often throw in threats of physical violence or other repercussions if you don’t do what they want.

Even though A Rose Blooms Among the Thorns is a fictional book it is taken from my own life experiences. I chose to make it fiction rather than non-fiction because I want every woman that has gone through domestic violence to be able to relate to it. I don’t want them to just read about another woman who experience domestic violence. I wanted them to read the story and relate to it to be able to make it their own. I also want them to know that another man is not the answer to getting free of their situation that healing is their answer. They need to be free to seek healing and find their self. To find who they really are. Jumping into another relationship after domestic violence without healing 90% of the time leads to another abusive relationship. Yet, if they take the time to heal then they can find a new life that does not include domestic violence.

I would like to leave you with this exerpt from my book.
'After stepping to the podium, LaRae looked down at the urn
holding Terri’s ashes then to the picture displayed on the easel before
looking back up and beginning to speak.
“Terri never made it to true womanhood for she was only nineteen
years old when she died. She will never know what it means to be a
mother or a grandmother because her life was devalued so greatly by
her abuser that it meant nothing to him to take it. Her life was snuffed
out instantly with no thought of remorse because her life wasn’t her
own; it had been taken from her. She had become property not a human being.'

Domestic violence and emotional abuse are behaviors used by one person in a relationship to control another. Do you know that every nine seconds a woman is assaulted and battered in this country, and 5.3
million women are abused each year, and that Domestic Violence is the single major cause of injury to women, more than muggings and car accidents combined. Fifty percent of all women murdered in the
United States are killed by a spouse or an intimate partner.
Also, over 500,000 women are stalked by an intimate partner each year. An average of about four women per day dies because of domestic violence. So you see on the day Terri died at the hands of her abuser so did three other women. Three other families in this country lost a mother, a sister, a daughter, an aunt, or a niece.
Terri Carter is not the first nor will she be the last this town will gather together in mourning over. I wish she would be the last, I pray she would be, but until this community starts changing and becoming
aware of domestic violence; there will be more victims like Terri.

Think about it! The next service could even be held for one of your family members…maybe even one of your daughters.”