Reviews are important to an author.  A good review boosts your self-esteem and makes you think you did something right.  A bad review can knock you back and demotivate you.  What you have to do as an author is take the good and the bad, and realise that it is okay that not everyone will like your work.  We are not all the same, have different likes and dislikes.  That's just the way it is.
M.C.V. Egan is a new author who shares her thoughts on reviews on my blog. 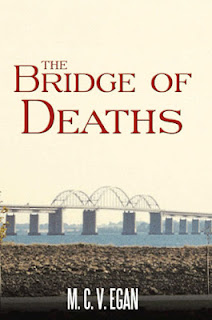 The Bridge of Deaths has received editorial, blogger and personal reviews from a wide variety of sources. Every single review has been an amazing surprise and learning experience, some very uplifting and one in particular a bit heartbreaking. I feel very honored and humbled by all my reviews, by some more honored and by others more humbled. In the next few paragraphs I’d like to share a little taste of what I have learned.
My first review came out of the paranormal realm from a psychic up North whom I have never met but have recently started following her radio show The Psychic Switch with Beckah Boyd. I was so surprised by words that have since been repeated by numerous reviews; “M.C.V. Egan twists truth and fiction making it difficult to distinguish one from the other”.  Well imagine my surprise that I who included 200+ footnotes to point out sources and truth felt reading that.  The fact is I found that fascinating and as it has been echoed by many a reviewer I realized that I am pretty good at twisting fact and fiction in an entertaining and legible manner. In that review as well I got a “spot on” for all the paranormal, which was indeed a nice feeling as I wanted to be as fair to the use of psychics as I was to the use of archives.


My worst review which earned me a sad lonely one star stated something to the fact that the book had potential but was a bore. I learned that would be reviewers needed to be aware that TBOD was primarily historical and a thinking book.  I thought I had prepared myself to be criticized and I must admit it hurt. Of course everyone is entitled to their opinion and I put myself out there to complete unknowns so I can only guess that it will not be the ‘only’ bad review I get, nor do I expect it to get any easier.
As the reviews started flowing I discovered that I had written a cross-genre piece and that I had the elements of Historical, Paranormal, Mystery and Romance. Amazing you might think an author who was un-aware what her book’s genre was. I honestly thought it was Historical Fiction, but the reviews kept on pouring in about how clever it was to combine all these elements.


I also discovered that my words have touched readers in a very wide variety of ways; I get comments about how they either relate to a character or know someone who reminds them of a character. I get feedback on curiosity about hypnosis and past-life regressions.  I had one reviewer call the book cozy.
I read my reviews several times, and I try to learn for future writing and maybe even if I decided to work on a different, simplified version of TBOD.


The most important thing that I have learned from my reviews is that everyone has a voice and that all voices are important. I feel that so many of my reviewers have beautiful prose and are such good writer’s themselves, that it is truly an honor to be reviewed by them.
M.C.V. Egan was born in Mexico City, moved to the USA at the age of 12, and then to Sweden when she got married.  She has always been interested in paranormal mysteries and past life regression.  She has used these interests to write her first Historical/Paranormal/Romance/Mystery.  As you can see, her book has it all!  The Bridge of Deaths can be purchased from Amazon and Barnes and Noble. 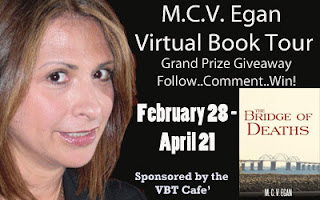