Time flies when you're having fun!

There is that old adage that goes 'Time flies when you're having fun.'  Time does seem to be going faster and faster, but maybe it's because I seem to be getting busier and busier that I just stop noticing time.  Time only drags when we have nothing to do and spend our time staring at the clock willing the seconds to tick by.  Some days I wish I had the time to stare at the clock.  I'm not always sure that I'm having fun, but I am definitely filling up my time. 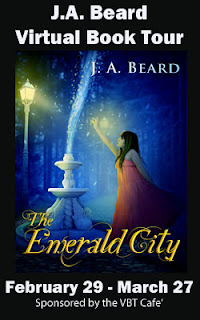 One person that seems to be spending his time wisely and having fun is YA author J.A. Beard.
J.A. Beard is a restless soul who is luckily married to an equally restless soul. His two children are too young yet to discuss whether or not they are restless souls. When he hasn’t been writing, studying history, or making excuses for not writing, he’s tried his hand at several careers including intelligence analysis, programming, and research science. Though he likes to declare himself the Pie Master, he’s yet to prove his worth in the brutal baking show-downs of Celebration, Florida.  J.A. Beard has taken The Wizard of Oz and had a lot of fun with it, turning it into contemporary YA fantasy.
In this loose re-imagining of the Wizard of Oz, Kansas teen Gail Dorjee has tried to escape from the pain of her parents' death by retreating into a hard shell of anger and sarcasm.
When her aunt and uncle ship her off to an elite Seattle boarding school, Osland Academy, she spends her first day making enemies, including the school's most powerful clique, the Winged, and their leader, the ruthless Diana.
Social war and the school's uptight teachers are only mild annoyances. Mysterious phone outages, bizarre behavioral blocks, and strange incidents suggest Osland is focused on something much more sinister than education.
Now Gail has to survive at Osland with a pretty pathetic assortment of potential allies: her airhead roommate, a cowardly victim of the Winged, and Diana's cold but handsome boyfriend, Nick.
We are very privileged to have J.A. Beard contribute to my blog.  He's written a great post titled 'Speaking With Them Not At Them.'
The question of how “young adult fiction” is defined is often asked during discussions of YA works. Many people who don’t read a lot of YA work tend to assume that any story with a non-adult protagonist is young adult (or, if the protagonist is young enough, middle grade fiction). It’s a seductively easy way to try and label such work, but it’s also somewhat misguided.
Obviously character age is important, but it’s not the whole picture. Is it more about subject matter? Despite the eternal “What’s acceptable for YA?” debate, a review of critically acclaimed and commercially successful YA fiction tends to suggest that, when treated well, no particular subject is off-limits. Perhaps none should be. YA readers are on the cusp of full adulthood and trying to keep important and difficult themes and subjects out of their fiction is a denial of their expanding maturity and responsibility.
So if it’s not purely age nor is it subject matter, then what defines young adult fiction? For me, it’s perspective and voice. People at different stages of their life have different perspectives, difference biases, and different ways of thinking. The relative popularity of first person in YA in reflects an attempt to more strongly present the perspective and voice of the non-adult characters. Even for books written in third person, that difference in how it is written is so important in helping the book connect with YA readers. There are so many ways to do this: word choice, emphasis, and general style.
Now some might ask if it’s even all that important to have stories told with the perspective and voice of young adult characters. Plenty of stories include non-adult characters but don’t bother to orient the main style of the narrative around them. Teen readers are more than capable of reading books not explicitly targeting them.
Sure, teen readers are, but in an age where books are competing for time against so many distractions, do we really want to reduce the chance of any reader connecting with a book?
Also, the whole idea is a bit unfair. Although people read a wide variety of books and genres (as well they should to expand their horizons) there’s also a certain appeal in connecting with stories you find relatable.  It’s a validation of a reader as a person and an acknowledgement that their perspective has validity.
I’ll even take this a step farther. I’ve often heard people complain about not understanding teens. If that’s the case, then it would seem some non-teens need to dive into popular (and therefore resonating with readers) YA fiction written from the perspective of teens. Maybe it’ll help expand their “adult” perspective.  J.A. Beard
J.A. Beard blogs at riftwatcher.blogspot.com and is on Twitter as @jabeard_rf.
His current release, a young adult urban fantasy, THE EMERALD CITY, details the transition of a Kansas teen to a sinister Seattle boarding school. It’s available for sale at Amazon, Barnes and Noble, Kobo, and Smashwords.
Amazon: http://www.amazon.com/The-Emerald-City-ebook/dp/B00761LCTY/ref=sr_1_1?ie=UTF8&qid=1330061232&sr=8-1
Barnes and Noble: http://www.barnesandnoble.com/w/the-emerald-city-ja-beard/1108613536?ean=2940014100717&itm=1&usri=the+emerald+city+beard
Kobo: http://www.kobobooks.com/ebook/The-Emerald-City/book-QKfF05Zk3kuwJvUYHp0tWg/page1.html
Smashwords: http://www.smashwords.com/books/view/130023
Posted by Cindy Vine at 2:41 PM

Thanks for having me.